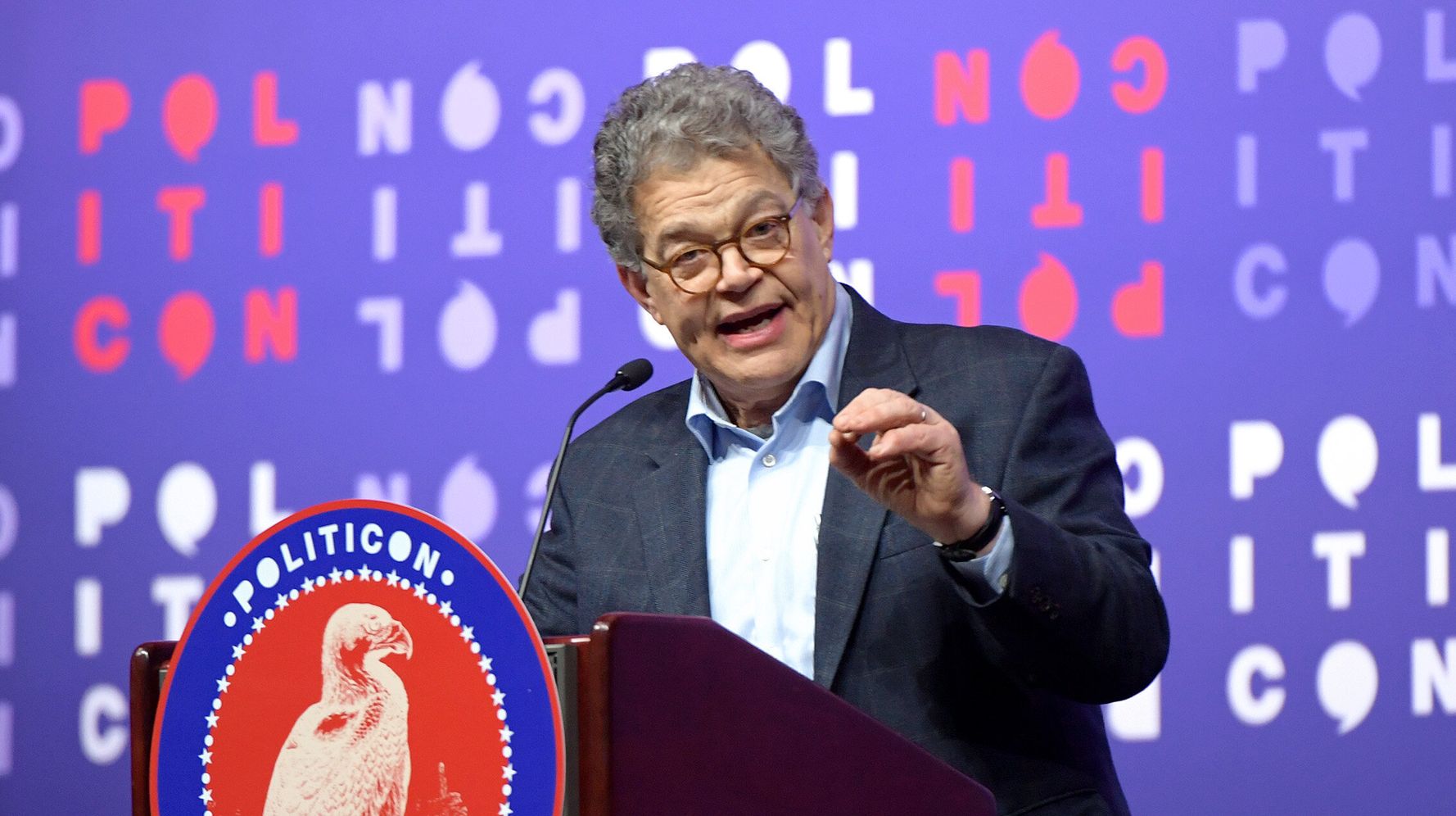 “I know a lot of you might be wondering what I’ve been up to,” Franken said at the event, which some nickname the “Comic-Con of politics.” “Well, when I left the Senate, I said that I was giving up my seat, but I wasn’t going to give up my voice … and I’ve spent a lot of time thinking about how to do that and how to best make a difference.”

Marketed as “An Evening With Al Franken,” the former lawmaker’s speech seemed part stand-up routine (imitating former colleagues including Sens. Bernie Sanders and Chuck Grassley), part walk down memory lane (sharing stories from his time on the Hill and his comedic career), and part political analysis (mocking when House Republicans stormed into a secure room while carrying their cell phones). Franken also spent parts of the speech criticizing Trump.

“I’d like to turn now to the essential task before us, which assuming he’s in the White House a year from now, is defeating the sick, cruel, corrupt psychopath,” Franken said. “Now that’s just my opinion.”

“The thing about Donald Trump is in addition to being a compulsive liar, a serial conman, a white supremacist and just kind of a jerk, this guy … does not know what he is doing,” he added.

The crowd, for the most part, was receptive of Franken’s remarks. However, the Music City Center auditorium was not packed. There were many empty seats, with some attendees coming and going during the hour-long remarks.

There was one tense moment during the speech. After Franken explained “that’s why I’m a Democrat,” one attendee yelled out “You’re also a liar, a fraud and a sexual predator.”

Franken seemed unfazed. “Ah don’t go,” he joked as the man left the room. He paused and added, “I’m sorry it’s a serious accusation and i take it seriously,” before returning to his scripted remarks.

. @AlFranken makes his return to the national scene at #Politicon2019, and there’s no holding back this time. Join us at @NashvilleMCC Oct 26 & 27 to hear Franken as he cuts through conventional wisdom to tell it how it really is. Tickets on sale now at https://t.co/lhq3gKgXTV 🇺🇸 pic.twitter.com/48Uz5b3HVU

The “Saturday Night Live” alum was part of a robust line-up of divisive speakers who headlined Politicon, including Sean Hannity, James Comey and Tomi Lahren.

The event, now in its fifth year, drew thousands of people ― Republicans, Democrats and everyone in between ― from across the country to its new location in Nashville. Politicon, previously held in Los Angeles, has become a forum for media pundits, current and former lawmakers and celebrities to discuss and debate politics in front of crowds of political junkies.

When asked why Franken was tapped as a keynote for the fifth annual event, co-organizer Simon Sidi said he’s wanted to book Franken as a panelist for years.

“I’ve always wanted to get Al here anyway just because you know he’s so great and people love him so much,” Sidi told HuffPost. “We’re happy to have him, very happy.”

The conference marked Franken’s official return to the public eye ― or as Politicon promoted it: his “return to the national scene” ― following his departure from the political realm about two years ago.

Dozens of Senate Democrats called for Franken to resign after eight women accused him of misconduct that included groping and forcible kissing. In wake of the scandal, Franken largely backed away from the spotlight. But the former Minnesota lawmaker gradually returned to public life earlier this year.

In July, The New Yorker’s Jane Mayer interviewed Franken for a lengthy profile, during which he told her he “absolutely” regrets resigning from Senate. Mayer wrote in her piece that seven current and former U.S. senators she interviewed said they regretted asking Franken for his resignation at the time.

Sen. Kirsten Gillibrand (D-N.Y.), who was the first to publicly voice that he should resign, faced backlash regarding her outspoken criticism of Franken, especially when she entered the 2020 Democratic presidential race. She dropped out in August after failing to qualify for the September debate.

[email protected]’s statement on Sen. Franken’s resignation as it’s come up in the 2020 campaign: pic.twitter.com/9OSTtpN1DL

Less than a week after the SiriusXM show was released, another woman came forward claiming Franken groped her in 2006 without her consent.

“I don’t say anything at the time, but I felt deeply, deeply uncomfortable,” the unnamed woman told New York magazine. “It was such a confusing experience.”

Franken didn’t deny his ninth accuser’s allegation. Instead, he told New York Magazine: “Two years ago, I would have sworn that I’d never done anything to make anyone feel uncomfortable, but it’s clear that I must have been doing something. As I’ve said before, I feel terrible that anyone came away from an interaction with me feeling bad.”

[email protected] “I know a lot of you might be wondering what I’ve been up to.” #politicon pic.twitter.com/6Txqw20QoI

Some in the audience seemed enthusiastic about Franken’s comeback.

“I think it sucks to punish someone especially if they take ownership of what they have done,” attendee Jessica Kensinger, a 33-year-old who identifies as politically progressive, told HuffPost. “The Democrats hung Franken at the cross.”

Kensinger, who drove eight hours from from Kansas City, Missouri to get to Politicon, said she’s “kind of over” the conversation around Franken’s allegations.

“If that a―hole can be on the Supreme Court, and Al Franken had to resign, that makes no sense to me,” she said, referring to the allegations of sexual assault raised against Supreme Court Justice Brett Kavanaugh.

Dennis Potvin, from Clarksville, Tenn., and his wife Lisa Worrell, said they came to Politicon partially to see Franken, who they have been fans of since his time on “SNL.”

“I don’t want to say give him a pass and no one else gets a pass,” Worrell said of Franken. “I just don’t think what I heard or saw was unforgivable. I think he was thrown under the bus. I think he’s a really smart man and I think he’s a great Democrat and I think we need him.”

“I agree,” Potvin said. “I think Democrats got caught up in what was happening with other candidates in other parties and they wanted to show that they were above that. They pulled some things out about [Franken] from the distant past, I think if he had been asked to apologize for it he would have done so. We all could have moved on. Instead they wanted to have a sacrifice.”

The couple, who sported gear supporting Rep.Tulsi Gabbard (D-Hawaii)’s 2020 presidential bid, told HuffPost they “think it’s great” that Franken “had a chance to come back.”

“I hope to see him get back and try and run for public office again,” Potvin said.

After Franken wrapped up his speech ― which went about ten minutes over the scheduled hour ― he received a standing ovation from attendees.