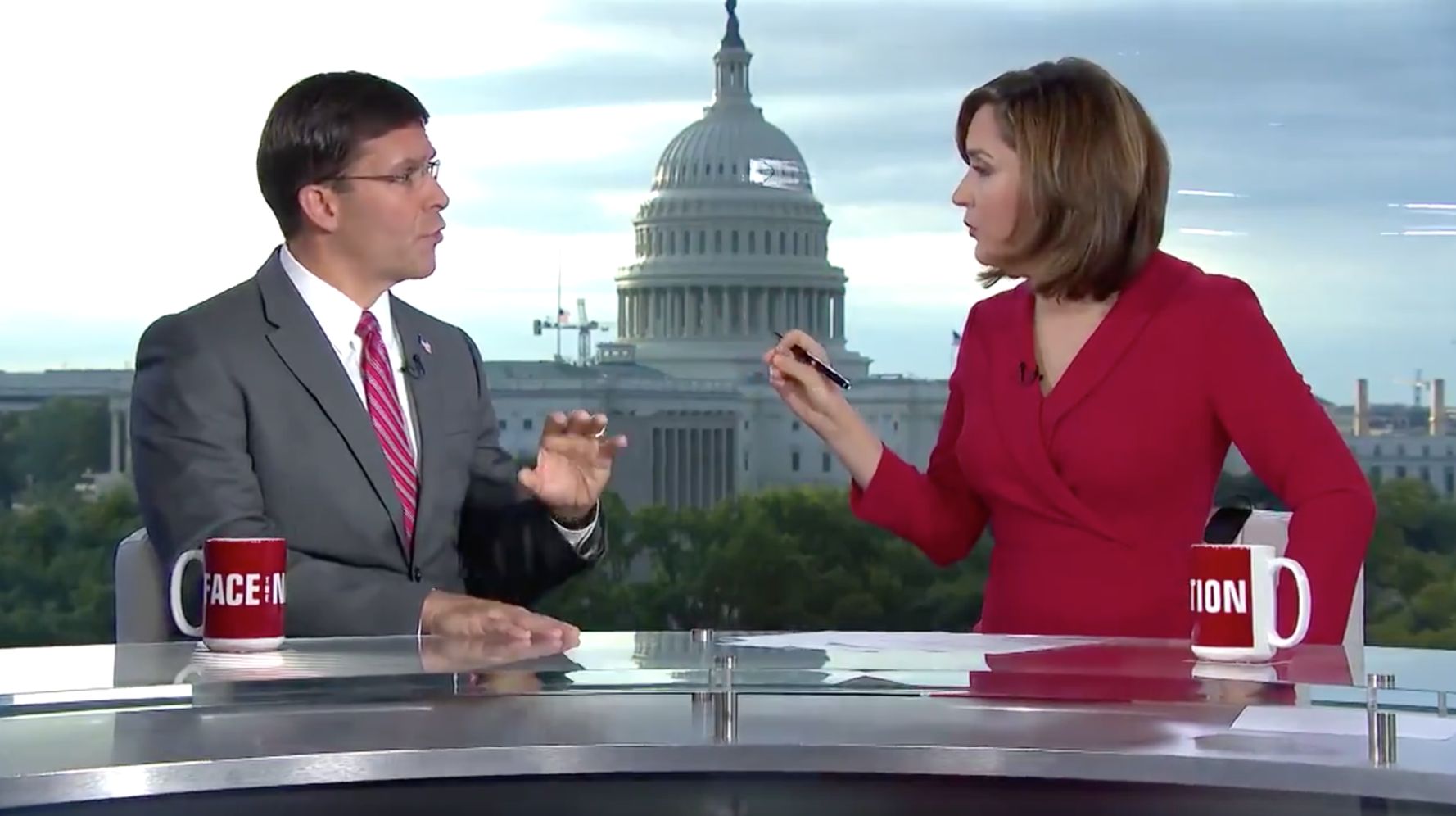 Defense Secretary Mark Esper on Sunday claimed Turkey would have invaded northern Syria and attacked U.S.-allied Kurdish forces regardless of whether Americans troops had stayed in the region.

During an appearance on CBS’s “Face The Nation,” Esper said the U.S. tried to persuade Turkey not to move forward with the military incursion against the Kurds. He claimed Trump ordered U.S. forces to withdraw because Turkey refused to stand down.

But host Margaret Brennan pushed back on that theory, questioning whether Turkey, a NATO ally, would have actually attacked U.S. troops if they’d stayed.

“You said you’re doing this for U.S. force protection,” Brennan said. “Those armies are advancing after the U.S. had already pulled back, after the U.S. Air Force that had controlled the airspace stopped doing so.”

She continued: “Do you actually believe they would advance if U.S. forces were there … and with the commander-in-chief saying, ‘Don’t do this?’”

Esper, appointed by Trump to lead the Pentagon in June, said he does.

WATCH: [email protected] on U.S. withdrawal from Syria: “We did not want to put American forces into harm’s way.” https://t.co/nyYEZhNfTO pic.twitter.com/Y61Wyqd7nv

Brennan continued to grill Esper, asking whether he believes Turkey would fire on U.S. forces.

“Well, I don’t know whether they would or they wouldn’t,” Esper said. “Despite our protestations, despite the fact that we urged the Turks not to do this, they decided to do it. And we told them we would not support them militarily in this action.”

In a subsequent interview on “Fox News Sunday,” Esper claimed the U.S. tried “everything we can to dissuade them from doing this.”

The Kurdish-led Syrian Democratic Forces (SDF) — U.S. troops’ main ally in the fight against the self-described Islamic State in Syria, also known as ISIS — and lawmakers from both parties have accused President Donald Trump of abandoning the Kurds and leaving them to be slaughtered by Turkish forces.

Turkey has long tried to get the U.S. to stop supporting the Syrian Kurds, who they view as terrorist insurgents. Foreign policy experts, including Brett McGurk, a former U.S. envoy to the global anti-ISIS coalition who resigned last year in protest of Trump, have warned that Trump’s decision not to defend the Kurds is highly immoral and threatens national security.

The Trump administration claims it did not abandon the Kurds, even though the U.S. is withdrawing its forces from the region. Over 130,000 people have been displaced since Thursday and hundreds of ISIS fighters have escaped as Turkish-led forces targeted Syrian border towns held by Kurdish militia.

Turkish-backed Arab fighters have also killed several Kurdish captives as well as Hervin Khalaf, the head of a Kurdish political party. A militant group posted a gruesome video of her execution online.

“Another fleeing pig has been liquidated by the hands of the National Army,” a militant can be heard saying in the video.

A Turkish newspaper described the attack as a “successful operation,” stating Khalaf had been “neutralized.”

Trump, during an interview Saturday with Fox News’ Jeanine Pirro, said he would take action against Turkey if they did something “really out of line.” He tweeted Sunday that the “Treasury is ready to go” on imposing sanctions against the country if needed.

Dealing with @LindseyGrahamSC and many members of Congress, including Democrats, about imposing powerful Sanctions on Turkey. Treasury is ready to go, additional legislation may be sought. There is great consensus on this. Turkey has asked that it not be done. Stay tuned!

Asked during a Sunday interview on ABC’s “This Week” what the Trump administration is waiting for regarding sanctions, Treasury Secretary Steve Mnuchin wouldn’t say specifically.

“Given that we’ve already seen 100,000 people reported displaced, these ISIS prisoners out ― set free ― execution of some of America’s Kurdish allies, what’s the hold up?” host Jon Karl asked. “Why don’t you just impose these sanctions?”

Mnuchin responded that the situation is “complicated” and “developing.”

“We are in daily communications with Turkey,” he said. “We are ready to go on a moment’s notice to put on sanctions.”

″But what are you waiting for?” Karl pressed. “This is a rapidly deteriorating situation.”

Mnuchin repeated that they can impose sanctions whenever they want, adding that the U.S. has “warned” the Turks.

“They know what we will do if they don’t stop these activities,” he said.

[email protected] on the U.S. imposing sanctions on Turkey: “What are you waiting for? … This is a rapidly deteriorating situation.”

Sec. Steve Mnuchin: “You’re correct. It is moving quickly … we’re ready to go at a moments notice to put on sanctions” https://t.co/BvkB9h7oKz pic.twitter.com/T61PaHffq6

Though Trump administration officials have tried to cede accountability, claiming the U.S. told Turkey not to attack the Kurds, Trump has repeatedly stated that he’s OK with the opposing forces fighting. The commander of the Kurdish forces reportedly told a top U.S. diplomat last week that the U.S. was leaving his people to be “slaughtered” and that they may need to ask Russia for help.

“The Kurds and Turkey have been fighting for many years,” the president tweeted. “Others may want to come in and fight for one side or the other. Let them!”

Do you remember two years ago when Iraq was going to fight the Kurds in a different part of Syria. Many people wanted us to fight with the Kurds against Iraq, who we just fought for. I said no, and the Kurds left the fight, twice. Now the same thing is happening with Turkey……

…..The Kurds and Turkey have been fighting for many years. Turkey considers the PKK the worst terrorists of all. Others may want to come in and fight for one side or the other. Let them! We are monitoring the situation closely. Endless Wars!