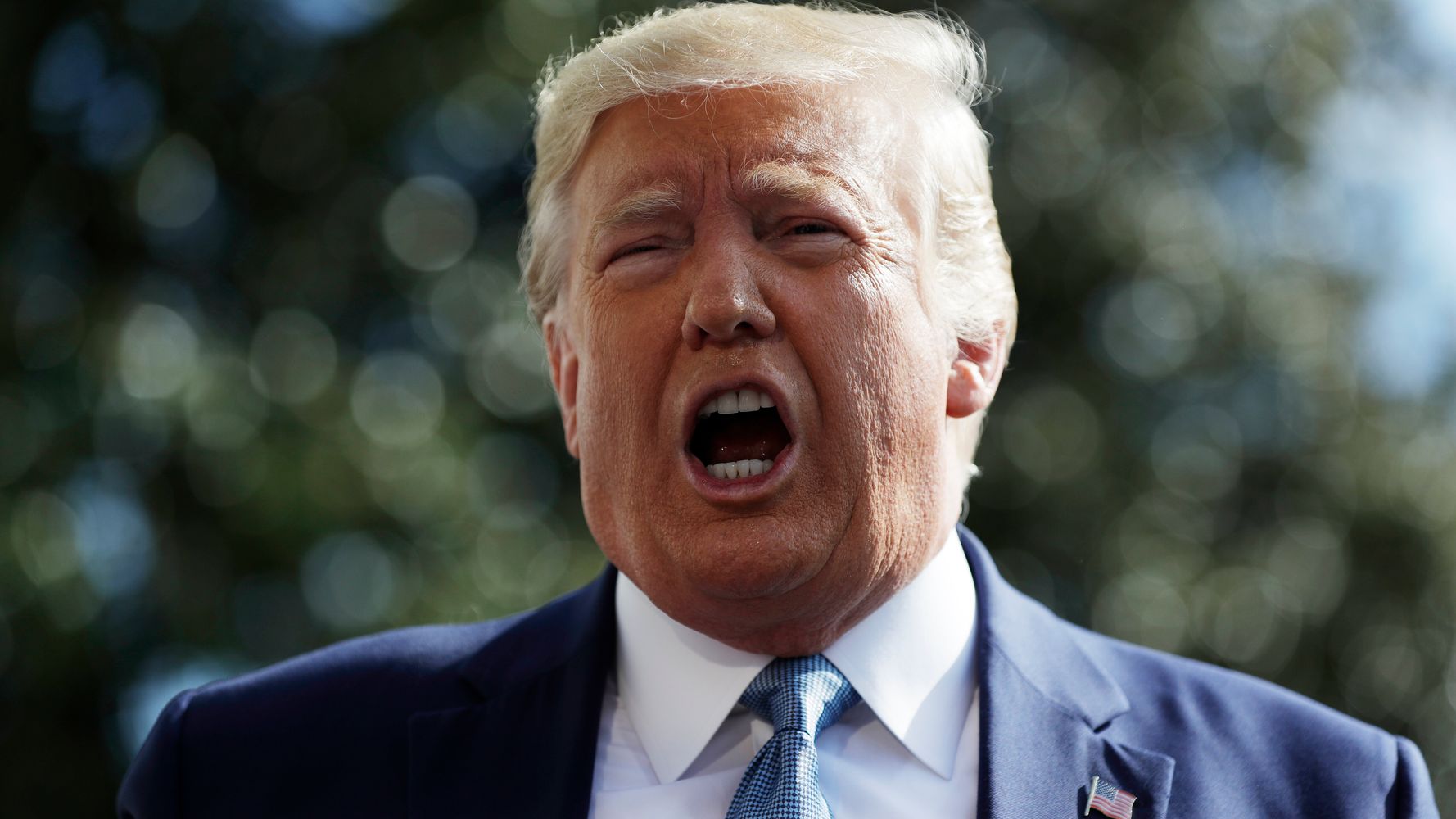 Nearly three years and some 7,000 falsehoods into his term and now under threat of impeachment, President Donald Trump continues pushing one of his biggest lies yet: That Joe Biden while vice president intervened overseas on his son’s behalf.

“Sleepy Joe Biden … forced a tough prosecutor out from investigating his son’s company by threat of not giving big dollars to Ukraine,” Trump wrote in a statement he posted on Twitter last month.

“The Biden family was PAID OFF, pure and simple!” he wrote Sunday.

Yet Trump’s claims about Biden are not only unfounded, but a review of the timeline shows they turn facts and recent history on their head ― a black-is-white, night-is-day reinterpretation to advance Trump’s political goal.

“It’s pretty hard to wrap your head around,” said Robert Weissman, president of the liberal group Public Citizen, adding that trying to understand Trump’s claims on the topic first requires “a re-read of ‘Alice in Wonderland.’”

Biden had been pushing for anti-corruption reforms in Ukraine since shortly after he became vice president in 2009 ― not as a freelance effort, but as part of the entire U.S. government and its Western allies’ attempts to improve the business climate for investment there and nudge the country away from Russia.

Biden’s son Hunter did not join the Ukrainian energy company Burisma’s board until 2014. And the push to increase corruption investigations in Ukraine was likely to hurt Burisma, not help it. That’s because the probes were being thwarted to protect Burisma’s owner when Joe Biden told Ukrainian officials that $1 billion in loan guarantees would be blocked if the country’s prosecutor general at the time was not fired.

That prosecutor, Viktor Shokin, was generally regarded as corrupt and unwilling to press cases against politically connected targets. Following the vice president’s ultimatum, Shokin was ousted in March 2016.

“Donald Trump is so terrified of facing off against Joe Biden in 2020 that he committed an unprecedented abuse of power and threw his presidency into free fall by trying to force Ukraine to spread a universally debunked, right-wing conspiracy theory about him,” said Andrew Bates, a spokesman for Biden’s presidential campaign. “Now he’s melting-down on television and publicly begging other foreign countries to bail his flailing campaign out with lies.”

Yet for Trump, attacking Biden while simultaneously trying to enmesh him in a previously separate conspiracy theory that absolves both Trump and Russia from questions about foreign meddling in the 2016 election has become an obsession, one top longtime Trump adviser told HuffPost. Not only is Trump making baseless remarks about it in public and on Twitter, he has dispatched the Justice Department, the State Department and his private lawyer, Rudy Giuliani, to travel the globe to prove it true.

“He’s a one-man wrecking crew,” the adviser said on condition of anonymity. “I don’t know why he just doesn’t get over it. Everybody wishes he would knock it off.”

Trump’s White House did not respond to HuffPost queries for this story.

Authoritarianism expert Ruth Ben-Ghiat, meanwhile, said that Trump’s increasing willingness to use his executive branch agencies to further his re-election campaign and to block investigations into him has dangerous historical parallels ― such as Italian strongman Benito Mussolini in the 1930s.

“Mussolini did this before he shut down an investigation that was ruining him by declaring dictatorship,” said Ben-Ghiat, a New York University history professor. “The openness of it all is the next stage of declaring you are above the law.”

The mother of all conspiracy theories

Trump and his top advisers decided last year that Biden would be his toughest general election opponent in 2020, and Trump long has been frequently attacking him in Twitter statements and public comments.

But earlier this year, that desire to hurt Biden’s candidacy merged with a sweeping conspiracy theory that Giuliani began pushing that wove together many of the president’s longtime angsts ― a unified Trump grievance theory, of sorts.

According to this scheme, as described on various right-wing internet pages and talk radio hosts, Russia did not actually interfere in the 2016 election to help Trump but was only made to look as if it had by forces in Ukraine loyal to former President Barack Obama. They worked to get GOP consultant Paul Manafort elevated to run Trump’s campaign in the spring of 2016 so they could then reveal his corruption later that summer, forcing Trump to fire him.

Proof of all this, according to these conspiracy theorists, will be revealed when the Democratic National Committee server that was hacked in 2016 is found in Ukraine, possibly along with Democratic nominee Hillary Clinton’s 33,000 deleted emails.

(The theory fails to explain why Obama and his supposed Ukrainian operatives did not publicize the Trump campaign’s connections with Russian spies before the election, rather than only afterward, thereby allowing him to win.)

Not a single part of the conspiracy theory has any basis in fact. But Trump embraced it because, the White House adviser said, it meshes with his unwillingness to accept that Russia helped him win the 2016 election.

Not only did Trump bring up the far-fetched theory during the now-infamous July 25 telephone call with Ukrainian president Volodymyr Zelensky, but he dispatched Attorney General William Barr to find evidence for it, which Barr has been doing much of this year during unpublicized trips overseas, including one last month to Italy.

Ironically, Trump’s readiness to accept Giuliani’s debunked conspiracy theory as fact is now likely to get him impeached by the House.

“If he continues to focus on that white whale, it’s going to bring him down,” former Trump homeland security adviser Tom Bossert told ABC News last month. “It’s not only a conspiracy, it is completely debunked…. The DNC server and that conspiracy theory has got to go, they have to stop with that, it cannot continue to be repeated in our discourse.”

That debunked theory, of course, was one of the topics during that July 25 phone call ― which wound up triggering the House impeachment inquiry after a whistleblower filed a complaint accusing Trump of soliciting campaign help from Ukraine’s president. That account was then backed up by a rough transcript of the call that Trump ordered released late last month. Additional whistleblowers are now corroborating concerns about the call, as well.

How much those accounts are even relevant at this point is unclear. Trump has repeatedly defended his decision to hold up $400 million in aid to Ukraine and to then ask Zelensky to investigate Biden. Last week on the White House South Lawn, he asked a second country to target Biden and his son.

“By the way, likewise, China should start an investigation into the Bidens, because what happened in China is just about as bad as what happened with ― with Ukraine,” he said before climbing aboard a Marine helicopter on his way to Florida.

Democrats are proceeding under the notion that merely asking for that assistance is an impeachable abuse of power. And so far, at least a few Republican senators ― 20 of whom would be needed to remove Trump from office ― are giving signals that they might agree.

“I thought the president made a big mistake by asking China to get involved in investigating a political opponent. It’s completely inappropriate,” Sen. Susan Collins of Maine said over the weekend. She added that she would not comment further: “Should the articles of impeachment come to the Senate, and right now I’m going to guess that they will, I will be acting as a juror as I did” in the 1999 impeachment trial of then-President Bil Clinton.

‘The most corrupt president’

Trump, despite the impeachment inquiry he has sparked, seems undeterred. He continues to repeat his false accusations against Biden, and even had his campaign put $10 million into a TV ad to repeat them on national television. (At least one cable network has refused to run the ad because of its blatant falsehoods.)

Yet as galling as Trump critics find the false corruption accusations is the fact that Trump has the audacity to make them.

Since taking office, Trump has steered his campaign, his party, other Republican candidates and groups, lobbyists with business before the executive branch and foreign governments to use his hotels and golf courses, from which he personally profits. Currently, he is pushing the U.S. government to host the next G-7 meeting at his own golf resort in Doral, Florida – which would put tens of millions of American taxpayer dollars into his own pocket, as well. Both actions are a dictionary definition of corruption ― using an official position to enrich oneself ― and Trump is doing them out in the open.

“This is not just the most corrupt president but the most blatantly corrupt,” said Jordan Libowitz, an official with the watchdog group Citizens for Responsibility and Ethics in Washington.

And while ethics groups agree that Hunter Biden’s work overseas in the years that his father was vice president created at least the appearance of a conflict of interest for his father, Trump, they say, has little standing to criticize it.

Not only does his elder daughter, son-in-law and two adult sons continue to benefit financially from Trump’s presidency, but Trump himself continues to benefit from projects in countries affected by decisions he makes as president.

This week, for example, Trump was informed that Turkey intended to move into northern Syria to attack Kurdish forces who had been critical allies in the U.S. war against Islamic State terrorists in Syria and Iraq. Trump responded by deciding to withdraw U.S. troops from the area and then inviting Turkey’s authoritarian ruler, Recep Tayyip Erdogan, to visit the White House next month.

Trump has a licensing deal with Trump Towers Istanbul that has provided him as much as $7 million over the last three years ― a business arrangement Trump himself conceded was a “conflict of interest” before he was elected.

Libowitz said Turkish officials had also made 14 visits to Trump’s hotel near the White House ― more than by any other country. “If President Trump wants to talk about corruption, we’re all for that,” he said. “But talk of corruption starts at home, or in this case, five blocks from his home.”

Trump, nevertheless, appears unfazed by sinking poll numbers and rising public support for his removal from office. On Monday, during a White House photo opportunity, he appeared to lump House Speaker Nancy Pelosi and House Intelligence Committee chairman Adam Schiff, both California Democrats, into the conspiracy against him.