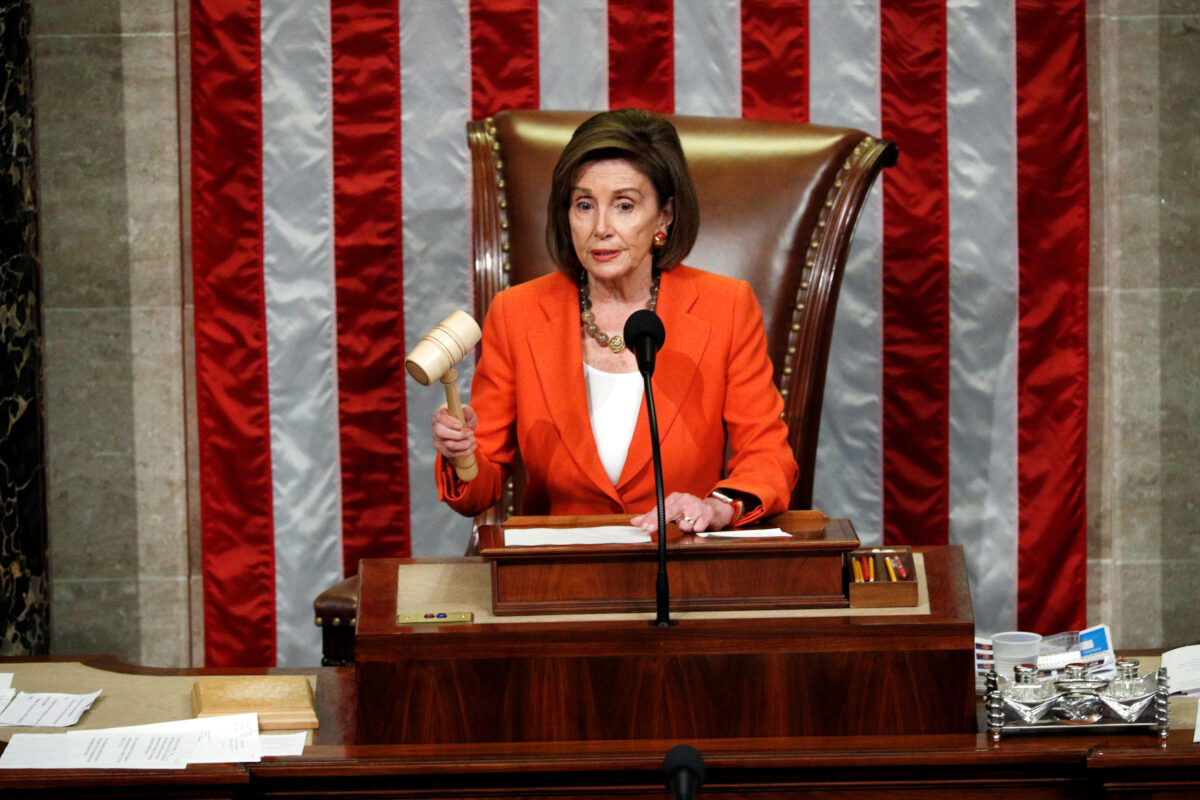 The House of Representatives voted along party lines on Oct. 31 to formalize the impeachment inquiry into President Donald Trump.

On the heels of the 232–196 vote, Republican leaders criticized the impeachment process so far, as well as the approved resolution going forward as unfair to the president and the GOP minority. All of the Republicans and two Democrats voted against the resolution.

“When you look at this Soviet-style process, it shows you they don’t really want to get to the truth. They want to remove a sitting president,” Rep. Steve Scalise (R-La.) said

Democrats defended the inquiry as a nonpartisan effort to get to the truth, and argued that the due process enshrined in the resolution goes beyond the rights afforded to the presidents and minorities in the impeachment proceedings against presidents Bill Clinton and Richard Nixon.

“I do not take any pleasure in the need for this resolution,” said Rep. Jim McGovern (D-Mass.) “We are not here in some partisan exercise. We are here because the facts compel us to be here. There is serious evidence that President Trump may have violated the constitution.”

Rep. Jeff Van Drew (D-N.J.) and Rep. Collin Peterson (D-Minn.) were the only Democrats to vote against the resolution; both won toss-up districts in the 2018 midterms and face tough reelection battles in 2020. In 2016, Trump won Peterson’s district by 31 percent and Van Drew’s district by nearly 5 percent. Other Democrats from toss-up districts voted in favor of the resolution.

“Without bipartisan support, I believe this inquiry will further divide the country, tearing it apart at the seams and will ultimately fail in the Senate,” Van Drew said in a statement.

“This impeachment process continues to be hopelessly partisan,” Peterson said in a statement. “I have some serious concerns with the way the closed-door depositions were run, and am skeptical that we will have a process that is open, transparent and fair.”

The lone independent in the House, Rep. Justin Amash (I-Mich.), voted in favor of the impeachment inquiry. Amash left the Republican Party earlier this year after disagreeing with fellow Republicans on how to interpret the final Russia report by special counsel Robert Mueller.

For more than a month, the Democrat-led House Intelligence Committee has carried on impeachment proceedings set in motion by House Speaker Nancy Pelosi (D-Calif.). Prior to the vote on Oct. 31, Republicans and Trump had criticized the process as illegitimate since the full House hadn’t voted to authorize it. The White House had vowed to not cooperate with the inquiry without a House vote to authorize it.

“The President has done nothing wrong, and the Democrats know it. Nancy Pelosi and the Democrats’ unhinged obsession with this illegitimate impeachment proceeding does not hurt President Trump; it hurts the American people,” White House press secretary Stephanie Grisham said in a statement.

“Speaker Pelosi, Chairman Schiff, and the Democrats conducted secret, behind-closed-door meetings, blocked the Administration from participating, and have now voted to authorize a second round of hearings that still fails to provide any due process whatsoever to the Administration. The Democrats want to render a verdict without giving the Administration a chance to mount a defense. That is unfair, unconstitutional, and fundamentally un-American.”

Trump weighed in on the vote on Twitter, calling it “The Greatest Witch Hunt In American History!”

“The Impeachment Hoax is hurting our Stock Market. The Do Nothing Democrats don’t care!” Trump wrote.

Democrats on the House Intelligence Committee have been investigating whether Trump and a small group of administration officials pressured Ukraine to investigate the Ukrainian business dealings of Hunter Biden and his father, 2020 presidential contender and former Vice President Joe Biden.

To date, the committee has conducted the hearings behind closed doors, with Democrats deciding which witnesses to call. Intelligence Committee Chairman Adam Schiff (D-Calif.) has ignored requests to release transcripts of depositions, including 72 bipartisan requests from fellow lawmakers to view the transcript of the deposition of Ambassador Kurt Volker. The secretive process has drawn harsh criticism from Republicans, three dozen of whom entered a closed-door deposition earlier this month in protest.

McGovern said in a speech on the House floor that the vote on the resolution marks a point in the inquiry after which the intelligence committee hearings would become public. Hours before the vote, a former top National Security Council official, Tim Morrison, arrived to testify behind closed doors.

McGovern said that GOP lawmakers have been allowed to question witnesses. Republicans complained the day before that Schiff interfered with a Republican colleague during the questioning of a witness and instructed the witness to not answer the question.

While Republicans focused their criticism on the procedural rights in the resolution afforded to the president and the minority, the differences between the current resolution and the one the House voted on during the Clinton era appear minimal. Both resolutions allow the minority to issue subpoenas and call on witnesses with the ultimate approval of the committee. Both resolutions also allow for the president and his counsel to be present during proceedings in the Judiciary committee.

The current resolution doesn’t allow the president or his counsel to appear in House Intelligence Committee impeachment hearings. The resolution orders the Intelligence committee to prepare a report for the Judiciary committee, which would then proceed with the next stage of the inquiry.

House Democrats initiated the impeachment process based on an anonymous whistleblower complaint that claimed Trump may have violated campaign finance law by asking Ukrainian President Volodymyr Zelensky to investigate the Bidens. The Justice Department reviewed the complaint and determined no further action was necessary.

In his request, Trump referenced the firing of top Ukrainian prosecutor Viktor Shokin. At the time of his firing, Shokin was investigating Burisma, a Ukrainian natural gas firm, and Biden’s son Hunter Biden held a paid position on the board of Burisma. Joe Biden bragged early last year about forcing the firing of the top prosecutor by withholding $1 billion in U.S. loan guarantees to Ukraine. In a sworn statement, Shokin has said that he was fired due to pressure from Biden because Shokin refused to drop the Burisma investigation.

In addition to requesting an inquiry into the Bidens, Trump told Zelensky to look into a server tied to the cybersecurity firm, CrowdStrike, which examined the Democratic National Committee server that was allegedly hacked by Russian operatives.

The Democrats are also attempting to determine whether a connection exists between military aid temporarily withheld from Ukraine and Trump’s request for an investigation. According to witness testimony, Ukrainian officials didn’t know that the aid was on hold until a month after the Trump–Zelensky call.

Testimony from other witnesses and public evidence suggests that Trump had other reasons to hold a sour view of Ukraine. Politico reported in 2017 that “Ukrainian government officials tried to help Hillary Clinton and undermine Trump by publicly questioning his fitness for office.” Rep. Devin Nunes (R-Calif.) told The Epoch Times that he is looking into Ukraine’s involvement in the 2016 election.

“We’re very well aware of what Ukrainian officials had said about the Trump campaign during the election,” Nunes said on Oct. 28. “We’ve been trying to unravel that. Why were there so many high-level Ukrainian officials during 2016 that were willing to say these things on the record? Almost an unprecedented amount of officials in a country that was really relying on the United States for their safety.”

The president’s daughter and adviser, Ivanka Trump, responded to the impeachment vote by citing a quote from Thomas Jefferson.

“Surrounded by enemies and spies catching and perverting every word that falls from my lips or flows from my pen, and inventing where facts fail them,” Thomas Jefferson wrote, while reflecting on life in Washington, in a letter to his daughter.