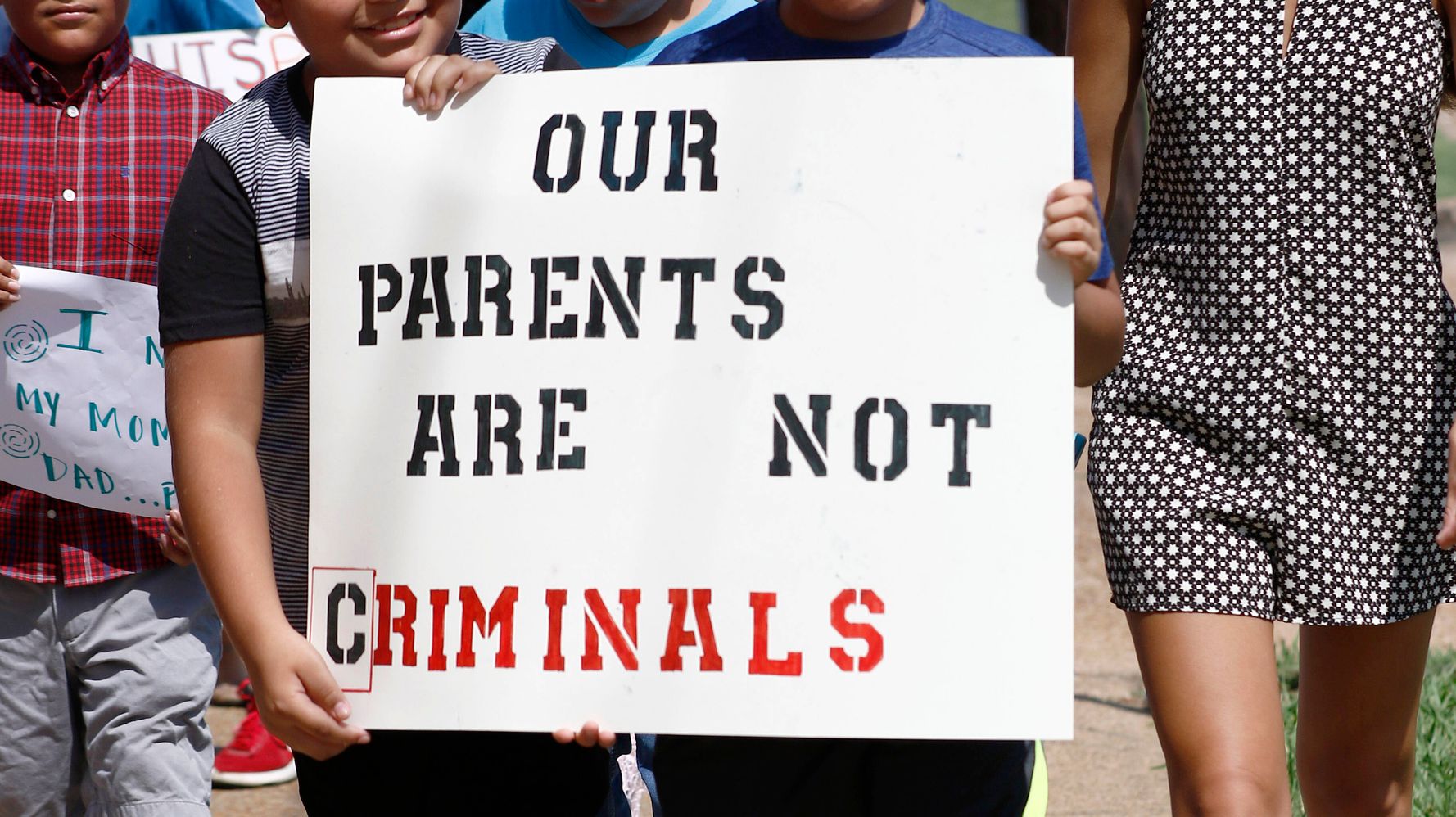 CANTON, Miss. (AP) — The children of Sacred Heart Catholic Church streamed out into Mississippi’s heat on a blistering Sunday afternoon, carrying what they said was a message of opposition against immigration raids their parents could not.

“I will not sit in silence while my parents are taken away,” read a sign carried by two Hispanic boys. They were among a group of several dozen marchers who set out on foot from the church to the town square in Canton to protest the 680 migrant arrests at seven poultry plants in Mississippi last Wednesday.

“Imagine coming home and not finding your parents,” said Dulce Basurto-Arce, an 18-year-old community college student, describing how parents of friends were arrested. “We are marching so no other kid has to go through what we went through. Let our voices be heard!”

On the square right now in Canton, Mississippi: Latino kids have marched from Sacred Heart Catholic Church to demonstrate against immigration raids. pic.twitter.com/RoIyBhZHcz

Basurto-Arce spoke from the steps of the same courthouse in Canton where Martin Luther King Jr. once rallied protesters against segregation in a 1966 “March Against Fear” across Mississippi.

Churches were the backbone of the civil rights movement. Today, as President Donald Trump and Republican allies continue to defend the raids, churches have emerged as the top sources of spiritual and material support to the mostly Mexican and Guatemalan workers targeted by the raids.

Some churches are going beyond comfort and material aid, with their response flaring into political opposition. The state’s Catholic, Episcopal, United Methodist and Evangelical Lutheran bishops denounced the raids in a joint statement Friday.

The bishops said they would aid the immigrant families, saying there is “an urgent and critical need at this time to avoid a worsening crisis.”

“We are called … to speak the truth. And the truth is, this is not right,” said Bishop Brian Seage of the Episcopal Diocese of Mississippi, speaking at a news conference one day after the raids.

On Sunday, Trump administration officials defended their actions, amid emotional pleas from children to let their parents go.

Acting Customs and Border Protection Commissioner Mark Morgan acknowledged that one video of an 11-year-old sobbing was “emotional” but said the girl was quickly reunited with her mother.

“I understand that the girl is upset. And I get that,” Morgan said on CNN. “But her father committed a crime.”

Acting Homeland Security Secretary Kevin McAleenan acknowledged that the timing of the raids was “unfortunate,” coming hours before Trump visited El Paso, Texas, where a man who told authorities he was targeting Mexicans killed 22 people on Aug. 3. But McAleenan told NBC the operation had been planned for more than a year.

Hours after the officials’ televised appearances, more than 250 people filled Sacred Heart to overflowing. A few were white people there to show support, but most were Hispanic congregants who normally attend the weekly Spanish-language Mass.

Deacon Cesar Sanchez, who is originally from Mexico’s Michoacán state and is studying to be a priest in the Jackson diocese, gave a homily in Spanish in which he spoke of Jesus also being an immigrant and a refugee. He said the church is a pilgrim church and that “God is with his people.”

The Canton church has emerged as a hub of the community’s response to the raid. Its pastor, the Rev. Mike O’Brien, stood with parishioners until 4 a.m. Thursday outside the Peco Foods plant in Canton, awaiting those freed from custody that night. O’Brien said he drove several people home who had hidden from federal agents inside the plant and emerged late at night.

Those arrested and released can’t work legally and their families may face one last paycheck as income dries up. Immigration court dates may not be until 2020 because of a deep backlog. Those who face court proceedings must also pay for their own lawyers or go without, and may have court dates at locations hundreds of miles away.

“What are their children going to eat?” the Rev. Jason Coker, coordinator of the Cooperative Baptist Fellowship in Mississippi, asked last week.

Maria Rodriguez is one person looking to churches for help. She said Sunday at Sacred Heart that her husband, Gumensihdo Rodriguez-Lopez, had been seized by federal agents at Peco and is now held in Natchez, Mississippi.

As she talked, she rocked the youngest of the couple’s five children, Azael, in his stroller. “He’s sad for his father,” she said in Spanish of the fussy toddler. “Everyone is sad.”

“We really need him back because we have kids and I don’t work,” she said through a translator. “I don’t know what I’m going to do.”

Other religious groups are helping, too.

Pastor Hugo Villegas is a missionary for the Scott County Baptist Association, overseeing a Spanish-speaking mission in Morton, where two plants were raided, as well as two in the larger neighboring town of Forest. People have been dropping off donations for the families at the Baptist association’s food pantry and clothes closet.

But Tere Villegas, the pastor’s wife, said few Hispanic families typically come to the pantry so they are spreading the word that aid is available. She added, English-speaking Baptists “have been helping out any way they can.”