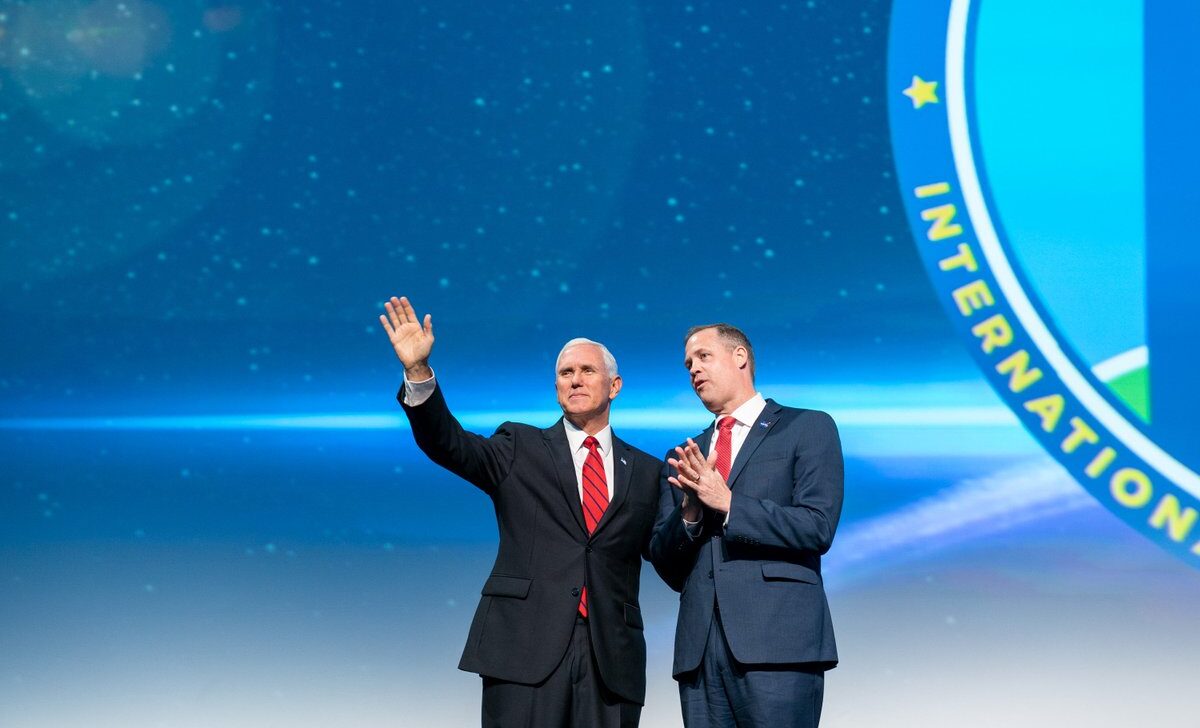 WASHINGTON—Vice President Mike Pence said that the U.S. Space Force will soon be a reality and positioned it as a key national security priority for safeguarding the rights of the United States and its “freedom-loving” allies in space, among other goals.

Speaking to an international audience at the 70th International Astronautical Congress—a global space advocacy organization—Pence reiterated President Donald Trump’s vision for the United States to lead in space once again. He brought up how Trump, in his first year in office, revived the National Space Council to coordinate space activities across the government.

Pence, who is also chairman of the National Space Council, said space plays a critical role in national and international security. He spoke about the soon-to-be-created Space Force, though he didn’t give an exact timeline for when it will begin.

“Trump has directed our administration to work with bipartisan leadership in Congress. Soon, we will stand up the sixth branch of our armed forces: the United States Space Force,” Pence said.

In August, Trump officially opened the U.S. Space Command, a precursor to the Space Force that Trump first announced in 2018. Air Force Gen. John Raymond will head the new unified combatant command. Raymond is currently the head of Air Force Space Command, a branch of the Air Force responsible for the military’s space operations.

“Soon, it will be a reality, and the Space Force will be a vanguard to defending our nation, defending our freedom and defending the rights of all freedom-loving nations in the vast expanse of space,” Pence continued.

Trump ordered the creation of the Space Force to strengthen the military’s focus on space operations. That includes launching satellites, providing communications, intelligence, missile warnings, and navigation services, as well as counterspace operations.

The weeklong event, hosted by the American Institute of Aeronautics and Astronautics at the Walter E. Washington Convention Center, invites the space community “to gather and discuss the advancement and progress of space in its various features.” The broad theme this year focuses on “the power of the past” and “the promise of the future.”

Pence, in a roughly 20-minute speech, spoke about how Trump made it U.S. policy to return to the moon by 2024, to ensure that the next man and first woman on the moon will be U.S. astronauts.

“Not only to plant our flag … but to establish a foundation for an eventual mission to Mars,” Pence told the crowd, as he laid out how the United States plans to achieve this goal.

“In order for us to take this next big leap, we’ll develop the technologies to live on the moon for months and even years,” he said. “We’ll learn how to make use of resources that the moon has to offer.

“That includes mining oxygen from the lunar surface and rocks to fuel reusable landers, extracting water from the permanently shadowed craters of the south pole, and developing a new generation of nuclear-powered spacecraft that will help us fly further and farther and faster than ever before.”

Pence also mentioned the power of private enterprise in space exploration. He described how NASA is leading a commercial-friendly effort that would create orbital platforms to one day replace the International Space Station.

In the first half of 2019, there was almost as much invested in space companies as the entire year before, Pence said. In the past decade alone, nearly $25 billion has been invested in almost 500 different space companies, with the majority going to U.S. businesses.

“Today, thanks to the leadership that President Trump has provided, the United States of America is open for business to all space enterprises,” Pence said.

A driving theme of Pence’s speech was focused on the cooperation between the United States and “freedom-loving” nations, a phrase the vice president used repeatedly.

“To be clear, our vision is to be the leader among freedom-loving nations on the adventure into the great unknown,” Pence said.

He said the United States will always be willing to work with “like-minded freedom-loving nations as we lead mankind into the final frontier.”

Pence also recognized former astronaut Buzz Aldrin, who was in the audience.

Pence said we must ensure that as more nations start to explore space, we should carry into space “our shared commitment to freedom and the rule of law and private property.”