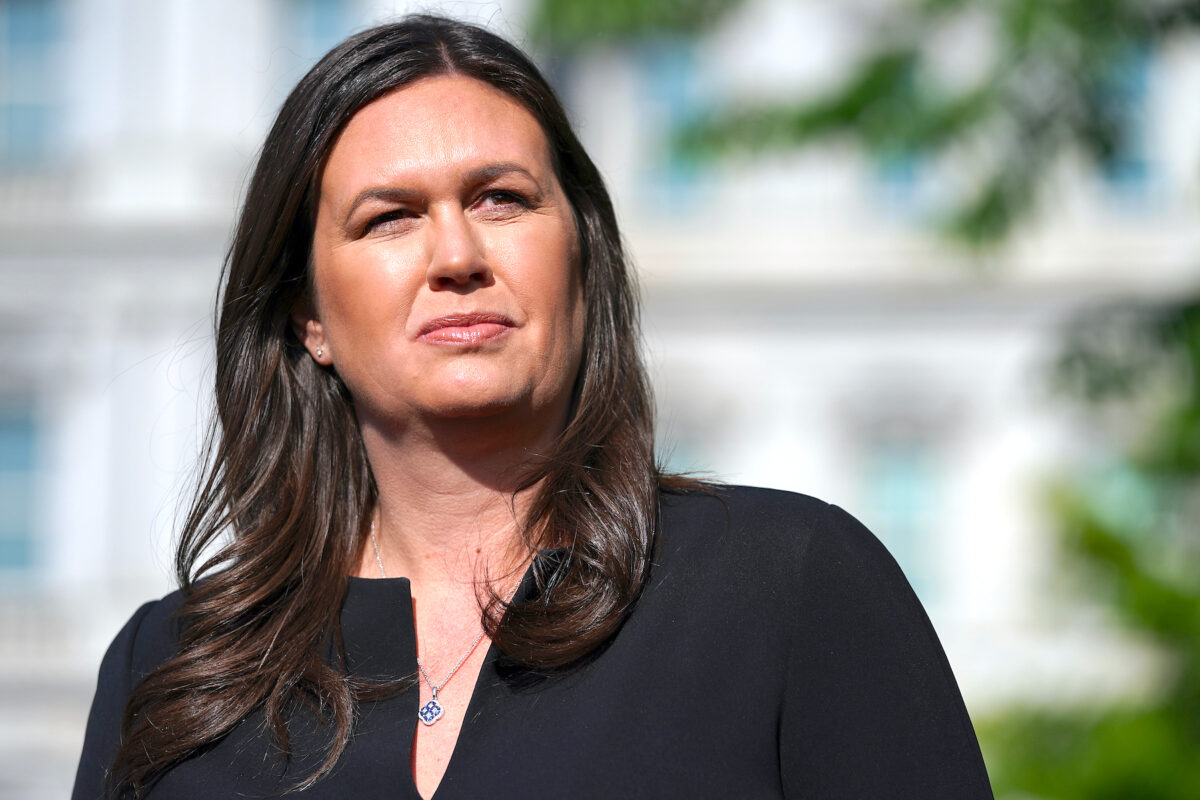 The White House announced on Oct. 6 that U.S. troops would leave northern Syria and hand over responsibility for captured fighters of the ISIS terrorist group to Turkey. According to Reuters, the troops began pulling out on Monday, Oct. 7.

Sanders, who is currently a Fox News contributor, told the outlet Thursday night on “America’s Newsroom” that the situation is “incredibly difficult” for the president.

Sanders noted that Trump has acknowledged the difficulty of informing the loved ones of those who died in combat.

“I’ve heard him say it before: there’s nothing more difficult in any part of his job than that role that he has to play as commander in chief,” she said. “I think the president is doing the right thing by looking at how we protect the military.”

“You have Turkey, who is a NATO ally. You have the Kurds, who have been an ally in the fight against ISIS,” Sanders continued. “Unfortunately, those two allies hate each other and the president wants to be careful that we don’t get stuck in the middle of another endless war.”

“This is a sad tragedy of the Middle East,” she added. “It’s a never-ending tale of the conflict that exists there.”

Sanders pointed out that while both Turkey and the Kurds are allies of the United States, the two have been unable to “come together and fight the real enemy—and that’s ISIS.”

“The president wants to be careful that we don’t continue to put American soldiers in harm’s way for an endless war,” Sanders reiterated. “He has also been extremely clear that if Turkey releases ISIS terrorists, there will be severe consequences.”

Trump on Monday wrote on Twitter: “As I have stated strongly before, and just to reiterate, if Turkey does anything that I, in my great and unmatched wisdom, consider to be off limits, I will totally destroy and obliterate the Economy of Turkey (I’ve done before!).”

On Wednesday, Turkish troops and their Syrian rebel allies began an attack on Kurdish militia in northeast Syria with airstrikes and artillery as well as a cross-border ground assault.

Turkey’s Defense Ministry said 228 Syrian Democratic Forces (SDF) had been killed so far in the offensive, reported Reuters. Meanwhile, the Syrian Observatory for Human Rights, which monitors the war, says at least 23 fighters with the SDF and six fighters with a Turkish-backed Syrian rebel group had been killed.

Trump said in a White House statement Wednesday: “This morning, Turkey, a NATO member, invaded Syria. The United States does not endorse this attack and has made it clear to Turkey that this operation is a bad idea.”

He later added: “Turkey has committed to protecting civilians, protecting religious minorities, including Christians, and ensuring no humanitarian crisis takes place—and we will hold them to this commitment. In addition, Turkey is now responsible for ensuring all ISIS fighters being held captive remain in prison and that ISIS does not reconstitute in any way, shape, or form. We expect Turkey to abide by all of its commitments, and we continue to monitor the situation closely.”

On Thursday afternoon, Trump wrote on Twitter: “We defeated 100% of the ISIS Caliphate and no longer have any troops in the area under attack by Turkey, in Syria. We did our job perfectly! Now Turkey is attacking the Kurds, who have been fighting each other for 200 years.

“We have one of three choices: Send in thousands of troops and win Militarily, hit Turkey very hard Financially and with Sanctions, or mediate a deal between Turkey and the Kurds!” he added.

He told reporters later that afternoon that he hopes he can follow through with the last option in his tweet.

“So what we have is really two choices: You have the choice of bringing in the military and defeating everybody again, or you have the choice of financially doing some very strong things to Turkey so that they take it a little bit easy on, really, competition that is—I don’t think it’s being fairly treated in many ways, okay? We have a very good relationship with the Kurds. Or we can mediate. I hope we can mediate.”

Trump later added, “We are going to possibly do something very, very tough with respect to sanctions and other financial things,” with regard to Turkey.