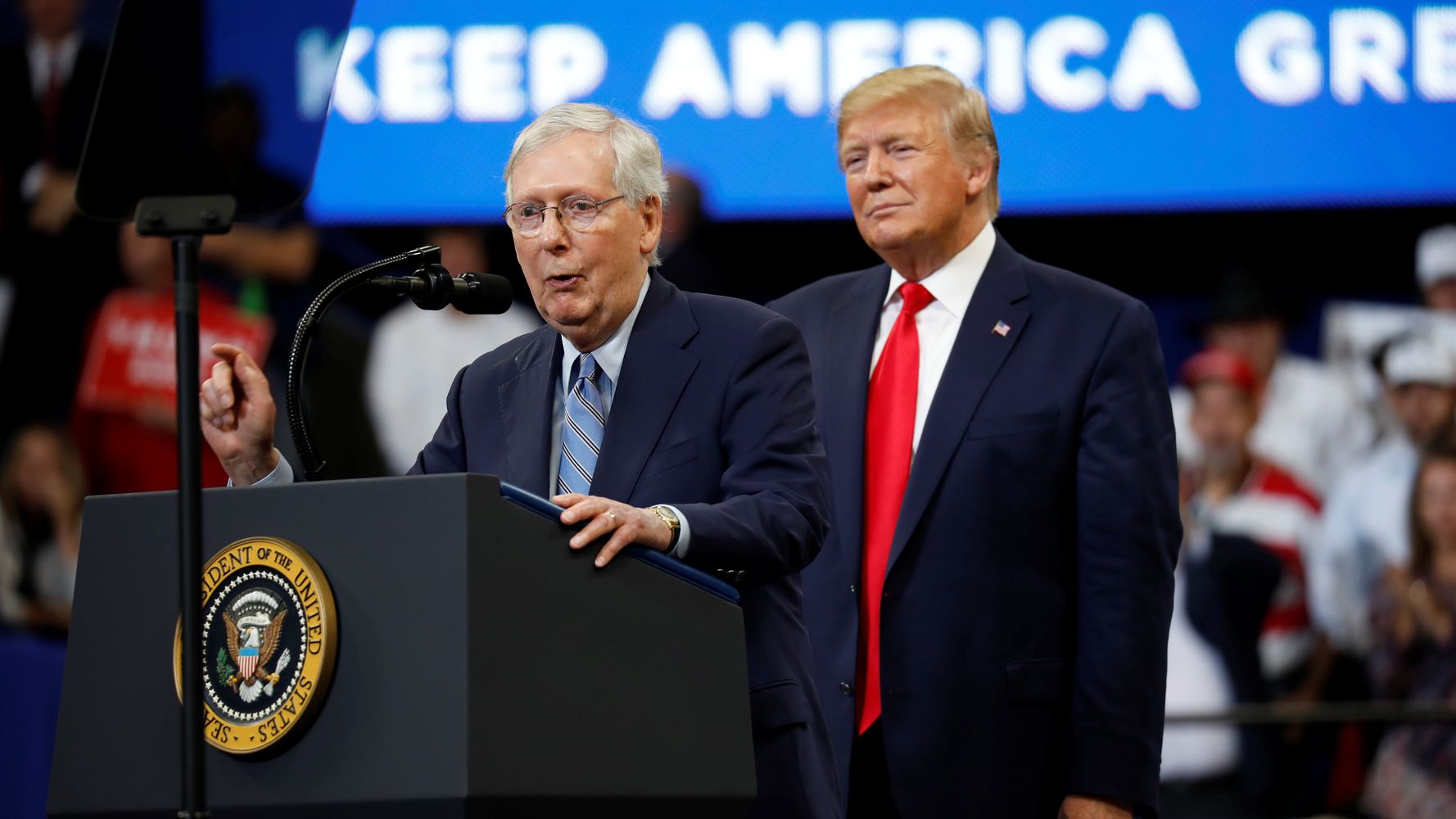 WASHINGTON ― President Donald Trump has been keeping a close eye on Senate races across the country ahead of the critical 2020 elections, seeking to install loyalist candidates on the ballot as he continues to reshape the Republican Party in his image.

But the efforts by Trump and his top allies to handpick candidates in New Hampshire, Kansas and most recently Georgia, for example, has also ruffled feathers with national and local GOP officials who have their own ideas about who should run for the upper chamber.

On Wednesday, Georgia Gov. Brian Kemp (R) defied Trump by appointing wealthy businesswoman Kelly Loeffler to take over the seat of retiring Sen. Johnny Isakson (R-Ga.) next month. The president had wanted Kemp to appoint Rep. Doug Collins (R-Ga.), a vocal Trump defender who has been deeply involved in fighting the House impeachment inquiry as the top GOP member on the Judiciary Committee. One of the president’s top allies, Fox News host Sean Hannity, even got into the mix, urging his viewers to call Kemp and tell him not to appoint Loeffler to the seat.

Loeffler, a longtime donor to both political parties, sought to reassure conservatives who had concerns about her candidacy on Wednesday, introducing herself alongside Kemp as: “A lifelong conservative. Pro-Second Amendment. Pro-military. Pro-wall. And pro-Trump.” The GOP establishment, including Senate Majority Leader Mitch McConnell (R-Ky.) and the National Republican Senatorial Committee, got on board a day earlier, endorsing Loeffler for the seat.

The Georgia scuffle, alongside similar interventions by Trump in the New Hampshire and Kansas races, shows how establishment Republicans have increasingly subsumed their political judgment to that of the president, and how presidential approval is now a no excuses requirement for any Republican hoping to run for the upper chamber. And with the 2020 Senate map focused on swing states and red-tinted states like Georgia and Arizona where Trump’s approval rating is low, it makes it difficult for the party’s candidates to generate distance between themselves and an unpopular president.

Democrats need to win at least three GOP-controlled Senate seats to gain control of the upper chamber in 2020. While Georgia isn’t in their top tier of targets ― Democratic strategists are focusing on races in Colorado, Maine, Arizona and North Carolina first ― the party does hope to make both Senate contests in the state competitive. (In addition to the race for the seat Loeffler will hold, incumbent GOP Sen. David Perdue is running for reelection.)

National GOP strategists downplayed the idea Trump was strongly opposed to Loeffler’s selection, suggesting he was more supportive of Collins than he was opposed to the businesswoman, who is the CEO of Bakkt, a bitcoin trading platform.

“If Trump wanted to stop this appointment, he could have,” said one GOP operative, who requested anonymity to comment on internal party discussions.

But that hasn’t stopped Hannity and conservative media personality Mark Levin from blasting Kemp and Loeffler.

Kemp and other Republicans have argued a female candidate with a business-first resume could help stanch mounting GOP losses in the suburbs of Atlanta, but the reason Republicans are most excited about the appointment has little to do with ideology or her personal profile: She has told Republicans she plans to spend tens of millions of dollars out of her personal fortune, which GOP strategists giddily predicted would put the race out of reach of Democrats.

Democrats scoffed at that argument, saying the controversy surrounding her appointment had already forced her to hug Trump tightly, ruining any chance she had at moderate appeal.

“The appointment of a political mega-donor is exactly what Georgians hate about Washington, and now that she’s bought her temporary seat, Kelly Loeffler has already pledged to walk lockstep with party leaders instead of putting what’s right for Georgia first,” Democratic Senatorial Campaign Committee spokesman Stewart Boss said. “Voters will reject this type of corruption at the ballot box in 2020.”

Democrats are still searching for a top-tier candidate for Loeffler’s race, which will feature an all-party primary on Election Day. If no candidate wins majority support, a runoff between the top two vote-getters will take place in January. The party is hoping to convince Ed Tarver, a former U.S. attorney in the state, to run.

Senate Republicans on Wednesday sought to minimize the impact of Trump’s meddling in races that may determine whether they retain control of the upper chamber next year. They argued that the president has a right to get involved as the de facto leader of the GOP, even though some acknowledged his efforts had caused turbulence within the party.

“I think the most important thing is to win and I would hope that everybody on my side of the aisle would be committed to choosing candidates who can do that,” Sen. John Cornyn (R-Texas) said of Loeffler’s appointment. “You can’t stop people from expressing their preference but I respect the role of [Kemp] in making that choice.”

Perdue argued that Loeffler’s selection was the result of a “healthy process.” The top Trump ally had refrained from wading into the fight over the seat and issued a lukewarm statement on Wednesday acknowledging Kemp’s announcement.

“I look forward to working with Kelly Loeffler, my new partner in the U.S. Senate, to continue [the] positive change for Georgia and our country,” Perdue said.

Trump’s heavy hand in Senate races isn’t limited to Georgia. In New Hampshire, Trump’s preference for the potential candidacy of Corey Lewandowski, his former campaign manager, has complicated local Republicans’ preference for Don Bolduc, a retired Army brigadier general, as the party’s nominee against Democratic Sen. Jeanne Shaheen. New Hampshire Gov. Chris Sununu (R), meanwhile, has expressed concern about the effect a Lewandowski nomination would have on his own political fortunes.

And GOP strategists, who are hoping Secretary of State Mike Pompeo will run for an open Senate seat in Kansas, had worried Trump would oppose Pompeo leaving the administration. Trump, in recent interviews, has told reporters he would allow Pompeo to run if it is necessary to win the seat.

“He’s a tremendous guy doing a tremendous job,” Trump told reporters at the NATO summit this week in London when asked about Pompeo potentially running for the seat. “You can never find anybody that can do a better job as secretary of state, but if we thought we were going to lose that, I would have a talk with Mike.”

But for now, Trump’s comments talking up Pompeo as a possible candidate in the race may be preventing other candidates who have already declared their candidacies from gaining traction with voters and donors, GOP Sen. Pat Roberts acknowledged Wednesday.

“If I were a candidate running for the Senate, I would think Mike Pompeo would be a pretty powerful candidate, so naturally, yeah,” said the Kansas senator, who is not running for reelection.

Pompeo, who served as a congressman from Kansas before being tapped as Trump’s CIA director and later as his secretary of state, has not ruled out throwing his hat into the ring. While Republican strategists are not sounding alarm bells about losing in a red state, Democrats won the state’s governorship in 2018 by defeating controversial former Kansas Secretary of State Kris Kobach and have recruited a strong candidate in Republican-turned-Democrat state legislator Barbara Bollier. Kobach is one of several candidates already in the GOP primary.

“Should Mike run, he’ll get a lot of support,” Roberts told reporters on Wednesday.