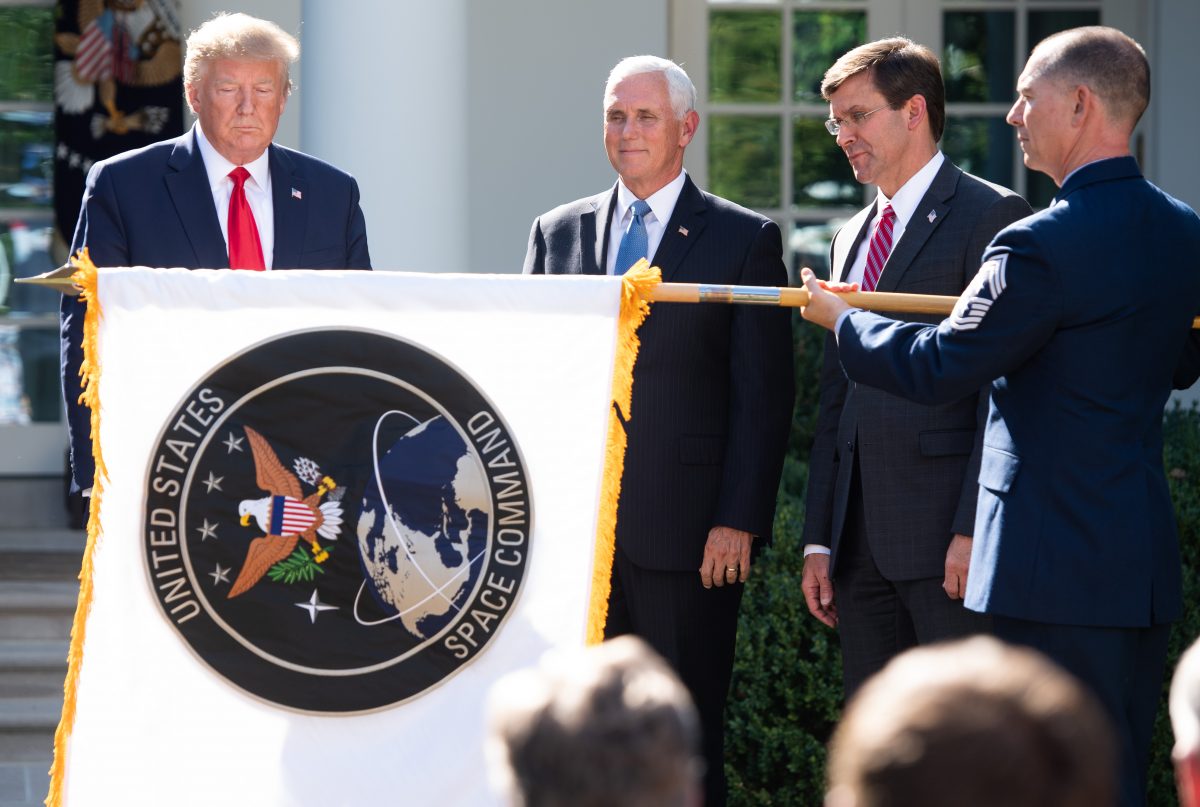 President Donald Trump officially opened the U.S. Space Command, a precursor to the new branch of the military, the Space Force, that Trump announced last year.

“SpaceCom will ensure that American dominance in space is never questioned and never threatened,” Trump said on the White House lawn on Aug. 29.

The new unified combatant command will be headed by Air Force Gen. John Raymond, currently the head of Air Force Space Command, a branch of the Air Force responsible for the military’s space operations.

Trump called the setting-up of Space Command a “landmark day” that recognizes the “centrality of space to American national security and defense.”

“Our adversaries are weaponizing earth’s orbits with new technology targeting American satellites that are critical to both battlefield operations and our way of life at home,” he said. It will be the aim of the command then to “boldly deter aggression and outpace America’s rivals by far.”

The system of combatant commands dates to 1946 and serves to control forces from multiple military branches in each command’s area of responsibility. The Space Command is the 11th one, and the second established by Trump, after the launch of Cyber Command on May 4 last year.

Trump announced on June 18, 2018, that Pentagon space operations will be separated into a new military branch, the U.S. Space Force.

The U.S. Space Command will be responsible for building up the new branch.

Trump ordered the creation of the Space Force to strengthen the military’s focus on space operations, which include launching satellites, providing communications, intelligence, missile warning, and navigation services, as well as counterspace operations.

The counterspace operations have especially grown in importance in recent years, as China and Russia have been working to extend their military capabilities into space.

“Chinese and Russian military doctrines indicate that they view space as important to modern warfare and view counterspace capabilities as a means to reduce U.S. and allied military effectiveness,” the Defense Intelligence Agency (DIA) said in a 2019 report (pdf).

Both China and Russia reorganized their militaries in 2015 to focus more on space operations.

They have developed “robust and capable space services, including space-based intelligence, surveillance, and reconnaissance” that allow them to “monitor, track, and target U.S. and allied forces,” the report says.

They have built surveillance networks “capable of searching, tracking, and characterizing satellites in all earth orbits.”

They’ve also been developing the means of disabling or destroying satellites, including by hacking, jamming, blinding them with lasers or microwaves, dragging, shooting, or ramming them with other satellites, as well as shooting them down with ground-based missiles.

Attacking satellites can also be used to cripple civilian services such as GPS, TV broadcasts, data transfers, and even credit card transactions and ATM withdrawals.

The Air Force has blamed China for stealing U.S. space technology, saying it allowed China to develop its own systems. One such system mirrors the American GPS with a net of global positioning satellites called BeiDou, which can be used for conventional strike weapons targeting.

The U.S.-China Economic Review Commission warned in 2017 that the completion of China’s 35-satellite BeiDou network by 2020 would allow it to strike targets with “position accuracies of under 10 meters.”

The earth’s orbits are becoming increasingly crowded real estate. They’re traversed by at least 666 intelligence satellites, 790 communication satellites, 129 navigation satellites, and 303 scientific satellites, William Roper, the assistant Air Force secretary for acquisition, technology and logistics, said in a March 20 speech. The U.S. accounts for nearly half of those satellites.

The space economy has grown to about $350 billion, he said.

The Air Force requested $14 billion for space projects in fiscal 2020, up 17 percent from the year earlier, “to develop new defendable space capabilities,” Roper said. Of that, $72 million is for setting up a Space Force headquarters with an initial staff of 160, National Defense reported.

The Space Command will start with a staff of about 600 and draw its resources from U.S. Strategic Command, which currently handles space operations, Space News reported.

“With today’s action, we open another great chapter in the extraordinary history of the United States military.” Trump said. “SpaceCom will ensure that America’s dominance in space is never questioned and never threatened, because we know the best way to prevent conflict is to prepare for victory.”