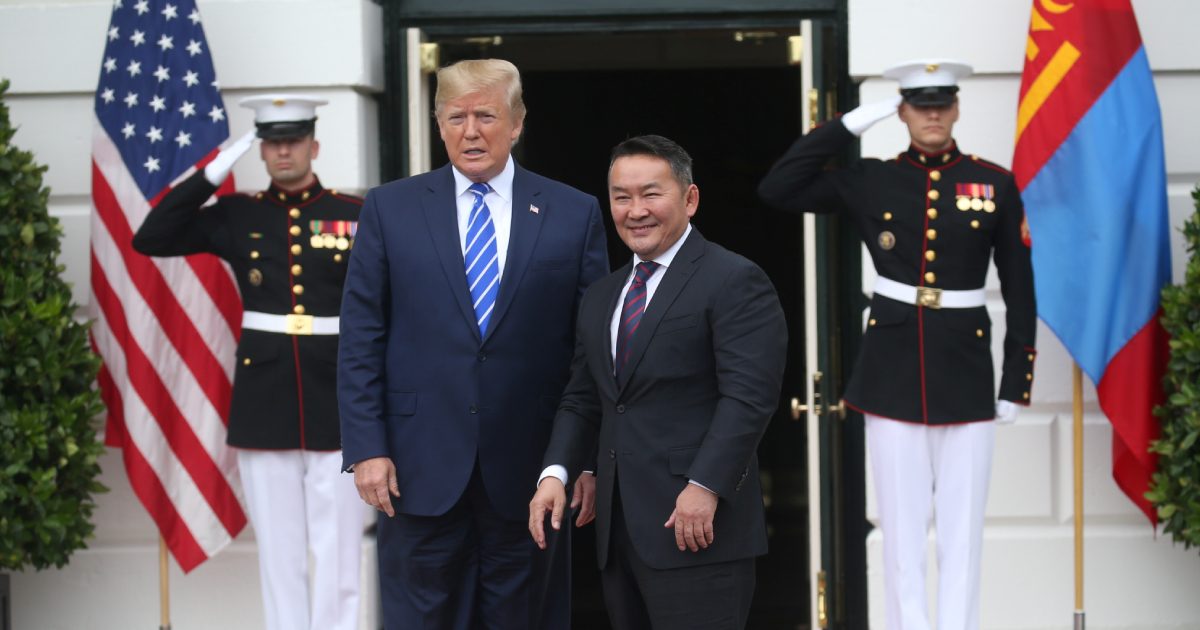 President Donald Trump on July 31 revealed the name he chose for a horse that was somewhat symbolically given to his 13-year-old son, Barron, by visiting Mongolian President Battulga Khaltmaa: Victory.

Battulga, the first president from the remote Asian nation to visit the White House since 2011, pulled up on the South Lawn driveway in a black SUV, without the horse.

A senior official had told reporters ahead of the visit that Battulga wanted Trump to name the Mongolian steed—a traditional symbolic gift for visiting dignitaries, who typically leave them behind to be cared for on the northern steppes. The ancient breed of tough, tiny horses was ridden by Genghis Khan and other warlords.

Asked by a reporter during a brief Rose Garden photo op if he had thought of a name for the horse, Trump said, “I did: ‘Victory.’”

Turning to Battulga, Trump said, “Thank you very much for the horse,” before asking reporters if they had seen a photo. (They had not.) “Beautiful,” he said.

Later, White House spokeswoman Stephanie Grisham tweeted a photo of a dun foal scampering beside a mare, and said the horse would remain in Mongolia. “The First Family is very grateful to Mongolia for this time-honored traditional gift,” Grisham said.

The First Family is very grateful to Mongolia for this time-honored traditional gift. The horse has been named “Victory” and will remain in Mongolia. pic.twitter.com/aFqtJzc1Il

The country, home to only about 3 million people, is a vast expanse of mineral-rich land strategically sandwiched between China and Russia.

Trump meets Weds with president of Mongolia, a country US views as strategically important amid tensions with its neighbors, China & Russia.

Battulga is eager for investment from the United States and other countries it considers “third neighbors” to help it reduce its economic dependence on China, through which most of its exports of cashmere and other goods move.

“The United States and Mongolia have agreed that their relationship has reached the level of a ‘strategic partnership,’” the White House said in a statement, noting that the two countries are building closer security ties.

Mongolia, a former Communist country, has volunteered to play a part in Trump’s diplomatic overtures to Pyongyang, offering to host Trump and North Korean leader Kim Jong Un for a summit. The country is accessible by rail from North Korea.

Like Trump, Battulga was a businessman before he entered public service. Battulga also was a former judo wrestling champion, and brought with him to the White House his aide, Dolgorsuren Dagvadorj, a well-known former sumo champion.

In news related to gifts for Barron, a Texas rancher has shown appreciation for President Donald Trump’s border security efforts by offering his belt buckle as a gift to the commander-in-chief’s son Barron.

The touching moment happened during the roundtable discussion of immigration and border security where Trump met with border patrol officials and local residents in McAllen, Texas, on Jan. 10.

Rancher Monty Awbrey handed the large belt buckle as a gesture of thanks, showing his appreciation for the president’s efforts to build a wall at the southwest border.

Texas landowner gives @realDonaldTrump his belt buckle after border security roundtable. “You can give it to your son Barron.” pic.twitter.com/QvVUe43zEo

“You can give it to your son, Barron,” Awbrey said as he handed the president the buckle.

Earlier Awbrey, who grew up in the Rio Grande Valley, shared his story about encountering illegal immigrants on his ranch, many of whom were in distress or had been sexually assaulted after being brought in by people smugglers.

“These [illegal immigrants] pay $3,000 a piece to come across.  It’s everything that they garnish up, you know, wage wise, to pay these people,” Awbrey said.

He claimed the people smugglers then “walk them 10 miles across the border, walk them around in a brush, and disappear on them.”

“They’re lost. They’re hopeless. They don’t know what to do. So they give up and they say, ‘Can you call Border Patrol for me?’” he said.