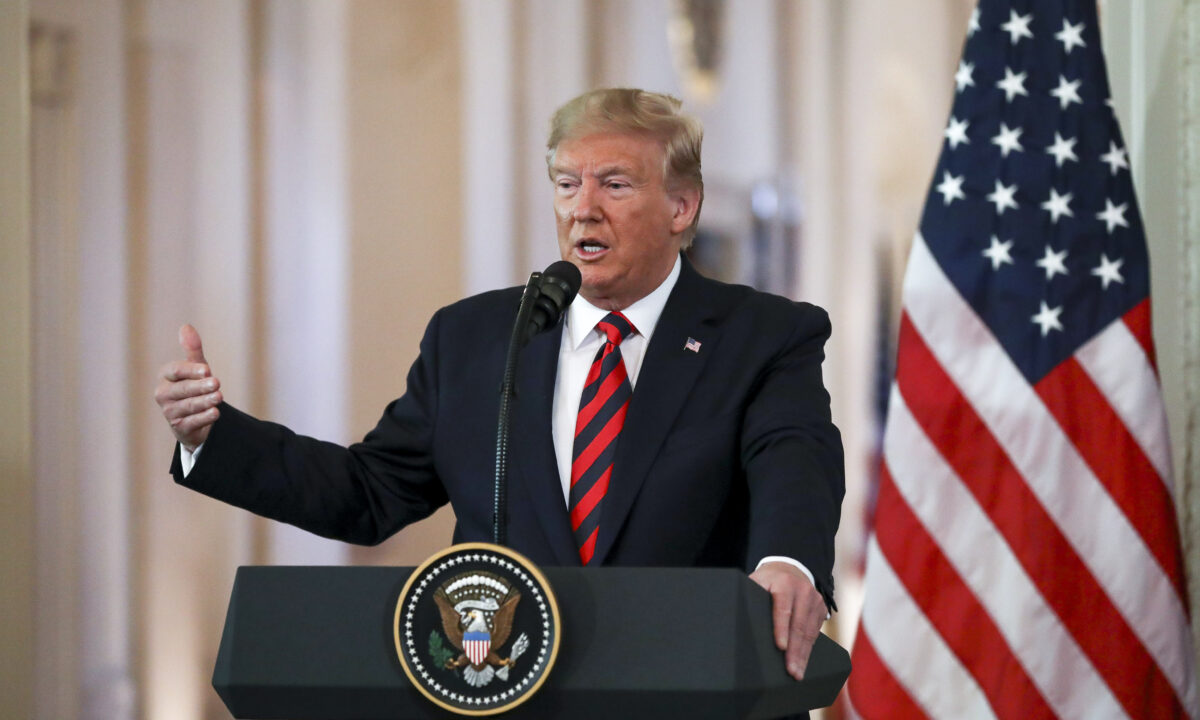 President Donald Trump issued a proclamation on Oct. 4 to deny visas to immigrants who will not have health insurance, in an effort to protect healthcare benefits for American citizens.

The rule, effective Nov. 3, means that foreign nationals will have to show that “they will be covered by health insurance within 30 days of entering the country or have the financial resources to pay for medical costs,” before they qualify for an immigrant visa. This could include proof that they will be covered under a family or employment-based healthcare plan.

The rule will not affect refugees, asylum seekers, or those who are on non-immigrant visas. According to the White House, “[a] number of exceptions will be made, such as for children of American citizens.”

“President Trump is taking this action to ensure we protect the availability of healthcare benefits for American citizens,” the White House said in an announcement, noting that “[a]dmitting large numbers of immigrants who cannot pay for their own healthcare puts a burden on our taxpayers and healthcare system.”

Trump said in his proclamation that when hospitals and other providers are not reimbursed for the care they give to those who are uninsured, the costs associated with such care get passed on to American citizens in the form of higher taxes, higher premiums, and higher fees for medical services.

“Such uncompensated costs … have exceeded $35 billion in each of the last 10 years,” he wrote. “These costs amount to approximately $7 million on average for each hospital in the United States, and can drive hospitals into insolvency.”

“Data shows that lawful immigrants are about three times more likely than United States citizens to lack health insurance,” he added. “Immigrants who enter this country should not further saddle our healthcare system, and subsequently American taxpayers, with higher costs.”

A study under the Kaiser Family Foundation published in July noted that in the non-elderly population, 23 percent of legal immigrants were likely to be uninsured. The figure dwindles to 8 percent when it comes to American citizens.

A study by the Center for Immigration Studies in 2015 noted that 42 percent of households headed by an immigrant (legal or illegal) included at least one person who receives Medicaid—compared to 23 percent of native households.

The new proclamation comes as the Trump administration announced in August a “public charge” rule (pdf) that seeks to ensure that future immigrants can support themselves without becoming a burden on taxpayers.

The rule, expected to take effect Oct. 15, enables the government to deny permanent resident status to those deemed as per the rule to be reliant on welfare programs. If someone is denied a green card, they are not deported but stay at the immigration status they were.

“Through the public charge rule, President Trump’s administration is reenforcing the ideal of self-sufficiency and personal responsibility, ensuring that immigrants are able to support themselves and become successful in America,” Ken Cuccinelli, acting director of U.S. Citizenship and Immigration Services, an agency under the Department of Homeland Security, said at a White House press briefing Aug. 12.

The new rule defines an immigrant as a “public charge” if they take in one or more designated public benefits for more than 12 months within a 36-month period. The rule also lists cases where people are exempt from the regulation, largely on humanitarian grounds.

The White House noted that promoting self-sufficiency among immigrants has been a basic principle of the immigration system for a long time, citing a 1996 bipartisan legislation (pdf) enacted by Congress and President Bill Clinton.

Part of the legislation states that “aliens within the nation’s borders [should] not depend on public resources to meet their needs.”

“The availability of public benefits [should] not constitute an incentive for immigration to the United States,” it continues, adding that “Despite the principle of self-sufficiency, aliens have been applying for and receiving public benefits from Federal, State, and local governments at increasing rates.”