Trump Touts Turkey-Syria Deal at Rally: They Would Have Never Made This Deal 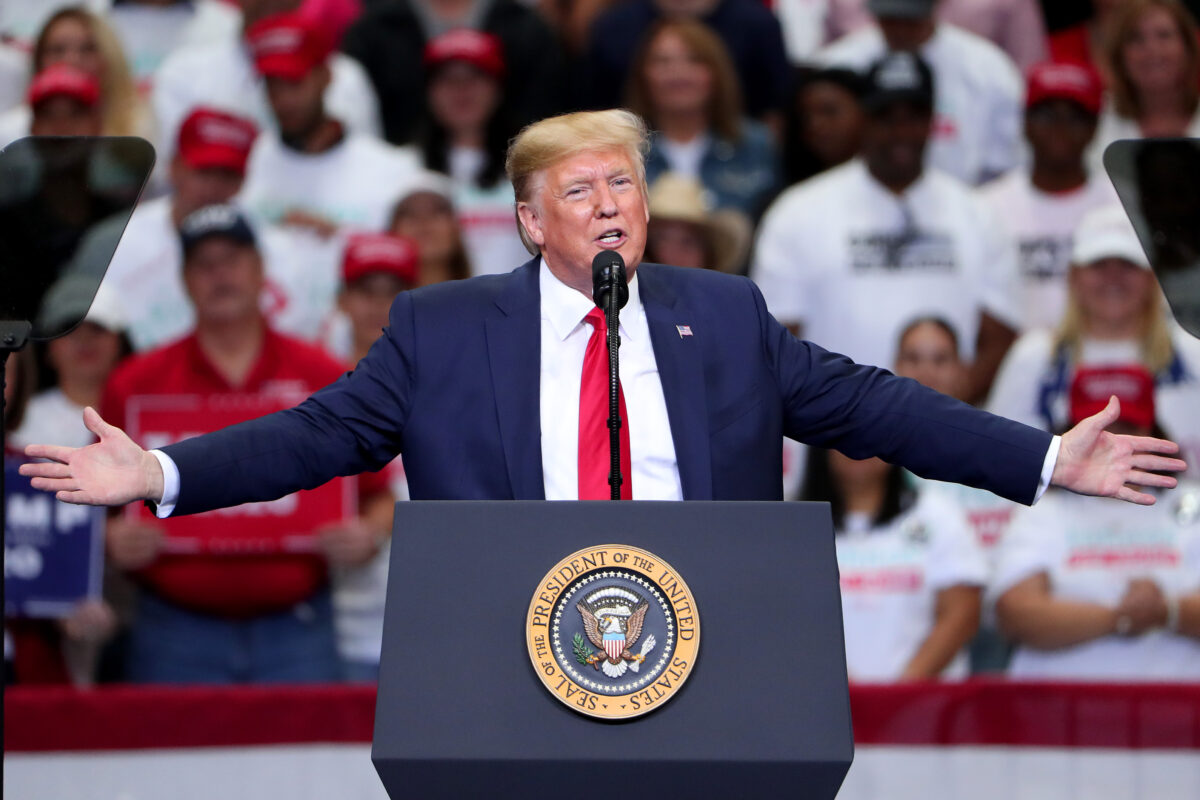 President Donald Trump cheered on the agreement reached between the United States and Turkey that put on hold Turkey’s military incursion into Syria.

“Without a little tough love, they would have never made this deal,” Trump said at the Oct. 17 rally in Dallas.

Earlier that day, Turkey agreed to pause the week-long offensive for 120 hours to allow for withdrawal of the Kurdish People’s Protection Unit (YPG), a military force Ankara considers an offshoot of the Kurdistan Workers’ Party (PKK), a terrorist group that has waged a decades-long insurgency in Turkey.

Trump was criticized for withdrawing a few dozen U.S. troops from northern Syria after Turkey announced in early October the incursion was imminent.

Trump said both Turkey, a NATO member, and the Kurds, who successfully fought against ISIS with U.S. help, are “our friends.”

But the agreement wouldn’t have been possible if the U.S. didn’t step back and “let them fight a little while,” he said, noting that “for 15 years, 20 years, you couldn’t make a deal. The Kurds didn’t want to move, Turkey didn’t want to budge.”

Turkey said it moved in to clear YPG from a 20-mile wide and about 250-mile long strip east of the Euphrates River in northern Syria along the Turkish border. It intends to set up a “safe zone” in the area to resettle 1-2 million Syrian refugees who’ve fled to Turkey to escape the Syrian civil war.

Statements by Turkish President Recep Tayyip Erdogan suggest he expects the YPG to move out of the whole “safe zone” and that the incursion will only end if the YPG complies.

Yet YPG made a deal with their previous enemy, the Russian-backed Syrian government of President Bashar al-Assad, to help defend the border.

Observations on the ground relayed by the Rojava Information Center indicate the Syrian forces contained Turkey and its Syrian proxy fighters to just several areas at the border.

The YPG-led Syrian Demcoratic Forces (SDF) acknowledged the ceasefire, but described it as pertaining to areas “along the fighting lines” from the border town of Ras al-Ain to the town of Tal Abyad, a fraction of the “safe zone.”

It’s not clear whether the SDF intends to withdraw from the entire “safe zone,” or just the areas from Ras al-Ain to Tal Abyad, or if it intends to withdraw at all. It’s also not clear whether they intend to comply with the deal’s condition that they are to leave their heavy weapons behind for Turkey to collect. The SDF didn’t immediately respond to emailed questions.

The U.S. did consult with the SDF before finalizing the ceasefire agreement.

Trump said the “Kurds have been terrific” and that “they’re going to move back a little bit.”

He also said the detention centers in northern Syria housing ISIS prisoners will be secured and the prisoners that escaped following the Turkish attack will be recaptured.

It’s not clear whether Turkey, SDF, the Syrian government or some combination of them is to be responsible for the task.

On the border itself shelling could be heard near the Syrian town of Ras al-Ain on Friday morning despite Thursday’s deal, and a spokesman for the Kurdish-led forces said Turkey was violating the ceasefire, hitting civilian targets in the town.

But Reuters journalists at the border said the bombardment subsided around mid-morning and a U.S. official said most of the fighting had stopped, although it would “take time for things to completely quiet down”.

Trump made clear that the U.S. has no interest in injecting itself militarily into the conflict, noting “we have to fundamentally change our approach to homeland security.”

“American combat troops should not be at the center of ancient sectarian conflicts all over the world. Bring our soldiers back home,” he said, prompting chants of “bring them home” and “USA” from the crowd.

“We are rebuilding our military and we’re not going to deplete it again on stupid, senseless, endless wars,” Trump said.