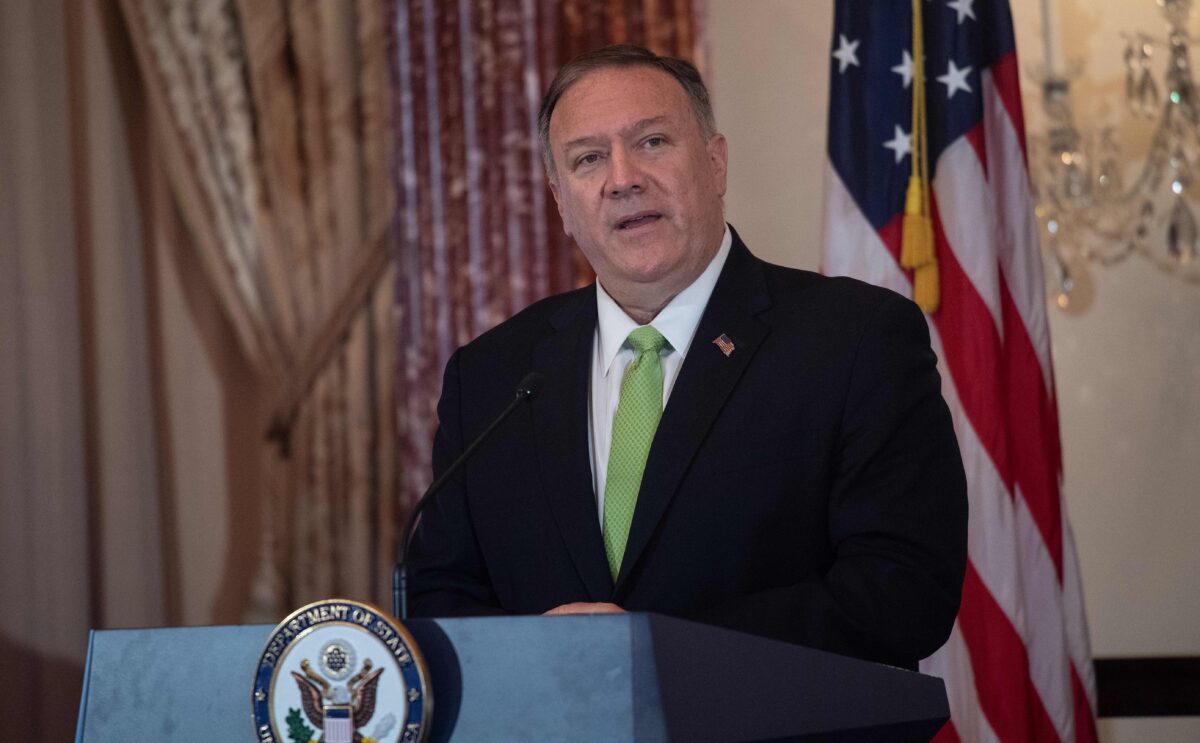 The administration of President Donald Trump urged the Iranian regime on Nov. 4 to release American citizens in its custody.

The call came on the 40th anniversary of the day that Iranian militants stormed the U.S. Embassy in Tehran, taking more than 50 Americans hostage for over 14 months.

The American captives “are a grim reminder that the regime is fundamentally exactly the same as it was 40 years ago,” a senior administration official said during a Nov. 4 conference call with reporters, noting that the hostage crisis anniversary “is an excellent opportunity for the Iranian regime to renounce its current practice of hostage-taking, and immediately and unconditionally release all unjustly detained Americans on Iranian soil in a sign that they are truly ready to rejoin the international community.”

Four Americans are known to be currently detained by Tehran: two on espionage charges, one for unknown reasons, and one for “collaborating with enemy states,” according to the advocacy group Center for Human Rights in Iran.

In addition, former FBI agent Robert Levinson is believed to be held by Iran, although his circumstances are unknown. The administration announced an offer of up to $20 million for credible information leading to Levinson’s safe return, an administration official said during the conference call.

Levinson disappeared in Kish Island, Iran, on March 9, 2007. The last picture his family saw of him alive is from April 2011, the official said. Iran previously denied holding Levinson.

In 2009, the FBI, under Director Robert Mueller, asked Russian oligarch Oleg Deripaska to spend millions on an operation to locate and free Levinson, according to a 2018 report by investigative journalist John Solomon.

The mission, which uncovered photos indicating that Levinson was alive, was thwarted by the State Department, then led by Hillary Clinton, which was “uncomfortable with Iran’s terms [for Levinson’s release], according to Deripaska’s lawyer and the Levinson family,” Solomon wrote, saying Deripaska was still rewarded by repeatedly being allowed to travel to the United States, despite allegations of ties to organized crime.

Also on Nov. 4, the administration imposed sanctions on nine appointees and representatives of Iran’s Supreme Leader Ali Khamenei, including Ebrahim Raisi, who is responsible for thousands of extrajudicial killings, including executions of seven children by the regime, one official said.

Two of the sanctioned people have also been linked to the 1983 U.S. Marine barracks bombing in Beirut that killed 241 U.S. service members, and the 1994 bombing in Buenos Aires, Argentina, of the Argentine Israelite Mutual Association, Secretary of State Mike Pompeo said in a Nov. 4 statement.

The sanctions add to an already extensive number imposed on Iran and its leadership by the administration upon Trump’s withdrawal from the Iran nuclear deal last year.

Iran announced on Nov. 4 that it’s doubled the number of uranium centrifuges it operates, to 60 from 30, further violating the deal it made with world powers in 2015.

Iran has repeatedly announced actions in violation of the deal, trying to pressure its European signatories to make up for the economic impact of the U.S. sanctions since the United States withdrew from the deal.

Tehran has gone from producing about one pound of low-enriched uranium a day to 11 pounds a day, said Ali Akbar Salehi, the head of the Atomic Energy Organization of Iran.

Iran is currently enriching uranium to 4.5 percent, in violation of the accord’s limit of 3.67 percent. At the 4.5 percent level, it’s enough to help power Iran’s Bushehr reactor, the country’s only nuclear power plant, but not enough to develop a nuclear weapon.

Increased centrifuge capacity could allow Iran to cut the time it needs to produce a nuclear weapon sooner than the previously estimated one year. Salehi also announced that Iran is working on a prototype centrifuge, which would work 50 times faster than the ones allowed under the deal.

Trump has criticized the deal for only delaying Iran’s nuclear ambitions by about a decade and leaving out a plethora of other grievances the United States has had with the mullah regime, including the development of ballistic missiles and supporting terrorists and militants across the Middle East.

In September, Washington blamed Iran for an attack on oil facilities in Saudi Arabia that interrupted nearly 58 percent of Saudi oil production and more than 5.5 percent of the world’s daily output. Iran-backed Houthi rebels in Yemen claimed responsibility.

“The Iranian regime continues to target innocent civilians for use as pawns in its failed foreign relations,” White House press secretary Stephanie Grisham said in a Nov. 4 release on the 1979 hostage crisis anniversary. “Until Iran changes this and its other hostile behavior, we will continue to impose crippling sanctions.”

She said the regime “has a choice“ between “being the world’s leading state sponsor of terrorism” and putting “the Iranian people first.”

“It can choose peace over hostage taking, assassinations, sabotage, maritime hijacking, and attacks on global oil markets,” she said. “The United States seeks peace, and we support the Iranian people. It is time for the Iranian regime to do the same.”

The anniversary was marked in Iran by protests in multiple cities featuring the burning of U.S. flags and chants of “death to America.”

“Our fight with America is over our independence, over not submitting to bullying, over values, beliefs, and our religion,” army chief Maj. Gen. Abdolrahim Mousavi said in a speech at the rally outside the former U.S. embassy in Tehran.

“They [Americans] will continue their hostilities, like the proverbial poisonous scorpion whose nature it is to sting and cannot be stopped unless it is crushed,” Mousavi said in remarks carried by state TV.

On Nov. 3, Khamenei, who has the ultimate say on all state matters, renewed a ban on talks with the United States.

“Those who believe that negotiations with the enemy will solve our problems are 100 percent wrong,” he said.

Both Saudi Arabia and the neighboring United Arab Emirates are believed to be talking to Tehran through back channels.

Democratic House Majority Leader on Impeachment: ‘We Did Not Rush to This Judgment’