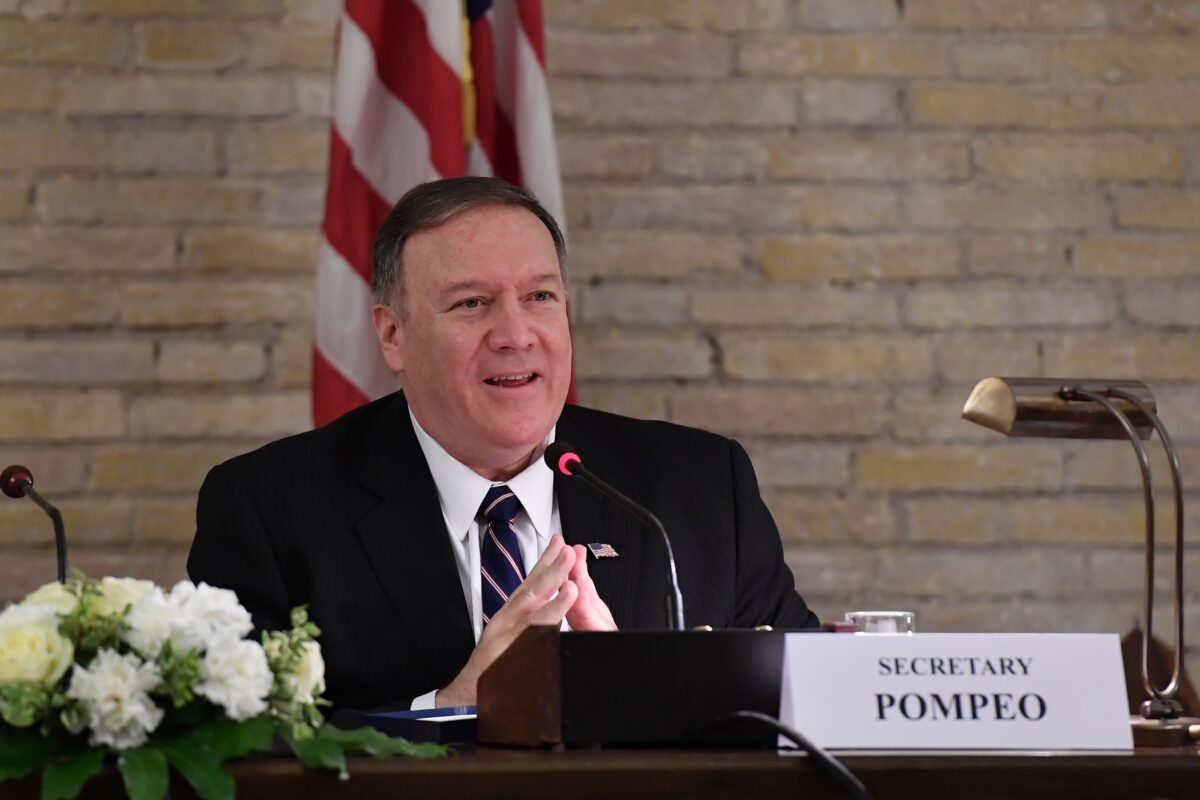 Secretary of State Mike Pompeo said in an interview aired on Oct. 20 that there wasn’t any quid pro quo tied to the temporary hold placed on U.S. military aid to Ukraine.

Pompeo defended the administration’s handling of the aid, as House Democrats pressed their impeachment inquiry, which is centered on President Donald Trump’s request for Ukraine to look into potential wrongdoing by former Vice President Joe Biden and his son, Hunter Biden.

The Democrats and their media allies allege, without providing evidence, that Trump held up the military aid to pressure Ukrainian leader Volodymyr Zelensky to investigate the Bidens and the Democrats.

“I never saw that in the decision-making process that I was a part of,” Pompeo told ABC News, when asked if there was a quid pro quo tied to the aid. “The conversation was always around what were the strategic implications, would that money get to the right place.”

The questions ABC posed to Pompeo revolved in part around remarks by White House Chief of Staff Mick Mulvaney on Oct. 17.

Establishment media outlets used the comments to suggest that the Trump administration held back aid to force Ukraine to probe the Democrats. On the call with Zelensky, Trump mentioned a Democratic National Committee (DNC) server which may be in the possession of a Ukrainian national.

Later that day, Mulvaney criticized the way his comments were spun, saying that the “media has decided to misconstrue my comments to advance a biased and political witch hunt against President Trump.” He again insisted on Oct. 20 that his remarks were taken out of context.

“That’s not what I said. That’s what people said that I said,” Mulvaney told Fox News.

“Can I say that people took that the wrong way? Absolutely. But I never said there was a quid pro quo because there isn’t.”

On the call with Zelensky, Trump appeared to refer to the DNC server allegedly hacked by Russian operatives during the 2016 election. Later on the call, Trump asked Zelensky to look into the business dealings of Hunter Biden, Joe Biden’s son. While Trump mentioned U.S. aid to Ukraine early in the call, the president didn’t connect the aid to the investigations he requested, according to the transcript (pdf) of the call released by the White House.

Trump and Zelensky have both said there was no pressure exerted on Ukraine during their call. A plain reading of the transcript doesn’t show any obvious pressure or quid pro quo.

The Democrats have interviewed several witnesses as part of an impeachment inquiry held largely behind closed doors. Their inquiry was triggered by a complaint by an anonymous whistleblower who alleged that Trump’s request to Zelensky could constitute a campaign finance violation. The Department of Justice reviewed the complaint and determined no further action is necessary.

The White House has vowed to not cooperate with the inquiry unless the Democrats hold a formal vote to initiate the proceedings. While the Constitution doesn’t explicitly require a formal vote, the two most recent impeachment inquiries started after a vote in the House of Representatives.

Republicans have criticized the secrecy of the impeachment inquiry. Rep. Jim Himes (D-Conn.), a member of the House Intelligence Committee, told CBS on Oct. 20 that the House would eventually hold open hearings.

In his request to Zelensky related to Hunter Biden, Trump appears to have referred to the firing of Ukrainian prosecutor Viktor Shokin. Vice President Joe Biden bragged about forcing Shokin’s firing by withholding $1 billion in U.S. loan guarantees. After he was ousted, Shokin said in a sworn statement that he was removed due to pressure from Biden, because he refused to drop an investigation into Burisma, a major Ukrainian natural gas company.

At the time Joe Biden applied the pressure, Hunter Biden held a paid position on the board of Burisma, according to a statement by his lawyer.