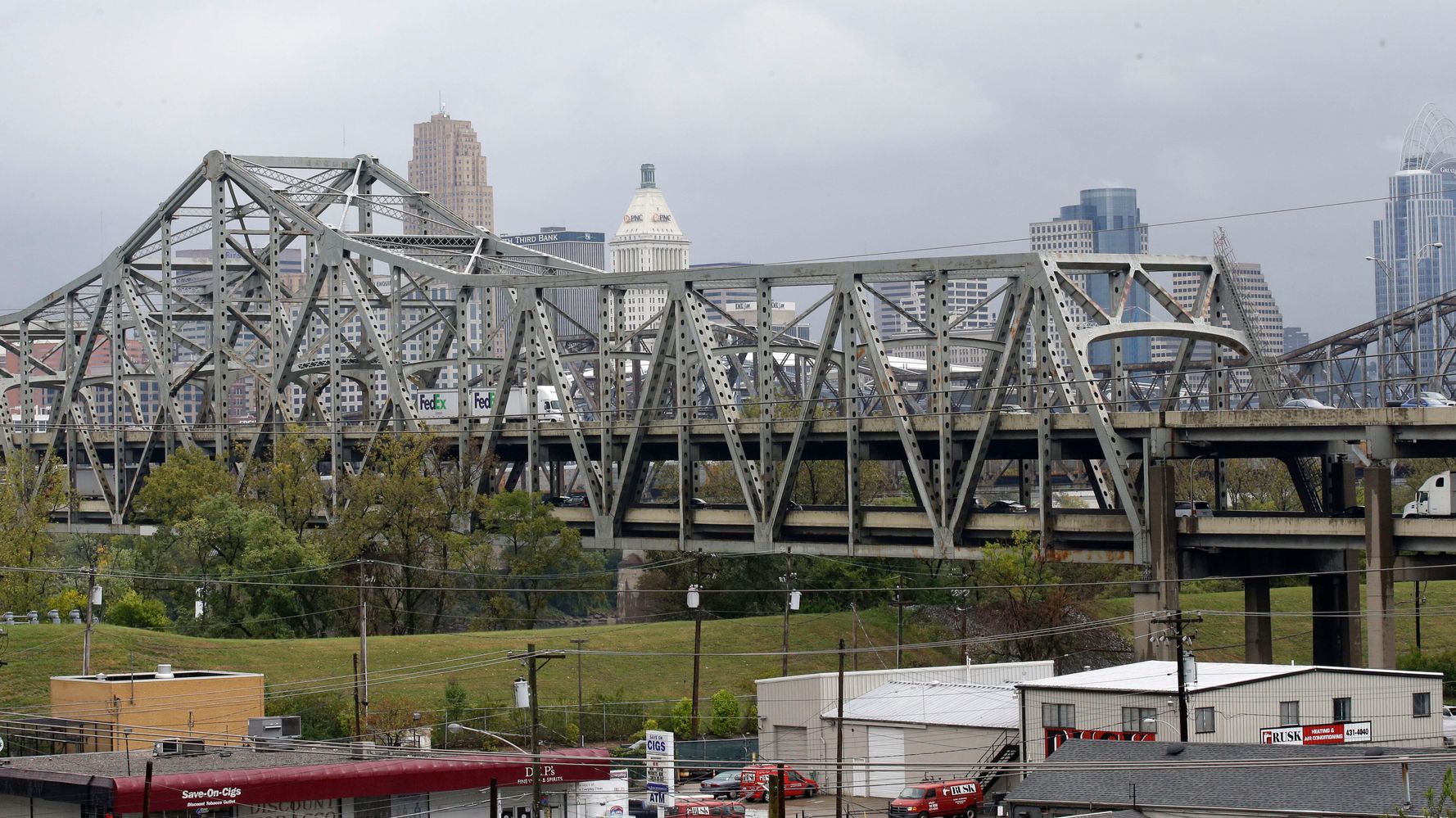 WASHINGTON ― Nearly three years after first promising to fix or replace a decaying and dangerous bridge across the Ohio River, President Donald Trump returns to Cincinnati on Thursday ― with the critical bridge unfixed, still decaying and still dangerous.

Trump is to hold a reelection rally at the U.S. Bank Arena ― barely a mile from the Brent Spence Bridge, which carries Interstate 75 and Interstate 71 across to Covington, Kentucky. The 56-year-old cantilevered truss span ― marred by rust and creaking ― has been deemed “functionally obsolete” for more than two decades. It has no shoulders and is frequently the site of accidents.

“The president promised to fix the Brent Spence Bridge, to invest $1 trillion in infrastructure projects and to support American workers,” Ohio Democratic Sen. Sherrod Brown said in a statement. “Instead, we’ve seen a president who has betrayed workers.”

A top aide to former Ohio governor and 2016 Republican presidential hopeful John Kasich said the reason Trump has not delivered is not complicated. “He’s a liar,” said John Weaver. “Yet some of the suckers still flock.”

An administration official, on condition of anonymity, said: “There is considerable disagreement between Ohio and Kentucky as to how to pay for a new bridge. It is our hope that an agreement can be reached between the two sides to fund this important project.”

Trump, though, promised in 2016 to build a replacement bridge ― not broker an agreement between the two states to pay for it themselves. The official declined to address that question.

Trump first promised to address the bridge just days before the 2016 election, at a rally in nearby Wilmington, Ohio, adding that the money could come from not paying “billions” to the United Nations to combat climate change. “Let’s save the money and replace the Brent Spence Bridge in Cincinnati, you like that? Which is critical to the region.”

He repeated the promise weeks into his term, in March 2017, telling a local TV reporter: “We’re going to get it fixed. … It’s dangerous, OK. We have many bridges like that.”

Trump promised then, as he has promised many times both before and since, to push a massive “infrastructure” plan: “We’re going to spend a trillion dollars on infrastructure and we’re going to renew our country. We have no choice. The roads, the bridges, the airports, the schools.”

But now in his 30th month in office, Trump and his White House have yet to send a comprehensive infrastructure plan to Capitol Hill, despite repeated claims that they were about to. The last meeting scheduled on the topic between Trump and Democratic congressional leaders, on May 22, ended moments after it started, with Trump leaving in a huff over the House’s investigations of him. “Infrastructure week,” in fact, has become an inside-the-Beltway joke to describe any particularly chaotic week in the White House.

Trump recently posted a tweet expressing support ― “Get it done. I am with you!” ― for a five-year, $290 billion transportation bill working its way through the Senate. That proposal, however, only authorizes spending, but does not allocate any money. There is currently no agreement on how to pay for the legislation, nor does it ensure that the Brent Spence project would get enough of the $6.5 billion set aside for bridges all over the country to do much good. A recent estimate to replace it came in at $2.6 billion.

Trump is approaching his reelection with a slew of unkept promises from his 2016 campaign, from replacing the Affordable Care Act with something far better but also far cheaper to forcing Mexico to pay for a new wall along the southern border.

Despite this, Trump has already started making similar promises for a second term. During a visit to southwestern Louisiana in May, Trump promised residents a new bridge to replace a dangerous through-truss span over the Calcasieu River ― but only if voters there helped him win reelection. “If we win this election, which is just 16 months away, we’re giving you a brand new I-10 bridge,” he said. “We’ll have it all set to go day one, right after the election.”