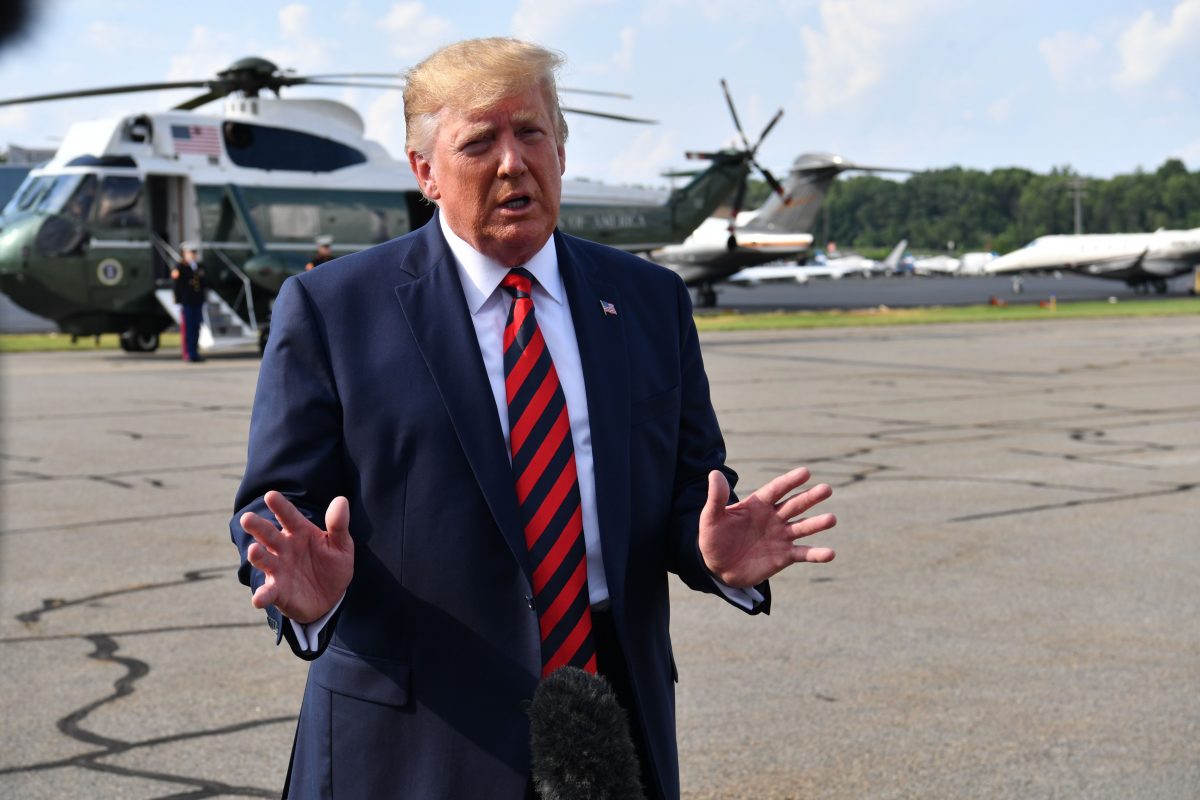 President Donald Trump drew attention to research that shows the sway Google holds over election results, after a former engineer for the company came forward with a pile of internal documents that suggest political interference.

“Wow, Report Just Out! Google manipulated from 2.6 million to 16 million votes for Hillary Clinton in 2016 Election!” Trump wrote on Aug. 19. “This was put out by a Clinton supporter, not a Trump Supporter! Google should be sued. My victory was even bigger than thought!”

Wow, Report Just Out! Google manipulated from 2.6 million to 16 million votes for Hillary Clinton in 2016 Election! This was put out by a Clinton supporter, not a Trump Supporter! Google should be sued. My victory was even bigger than thought! @JudicialWatch

Trump was most likely referring to the work of Robert Epstein, a research psychologist at the American Institute for Behavioral Research and Technology in California, who’s studied for years about how much influence Google has on its users’ political views and voting.

In a Feb. 18, 2016, essay, Epstein said that Google had “the power to drive between 2.6 million and 10.4 million votes to Clinton on Election Day, with no one knowing that this is occurring and without leaving a paper trail.”

Based on his monitoring of Google search results on Election Day 2016 and in the weeks prior, Epstein determined that there was indeed a pro-Clinton bias in the results and that 2.6 million votes were shifted. He said he personally supported Clinton in the race.

A Google executive told Congress in July that the company’s products are designed and operated to be politically neutral.

While Google previously criticized Epstein’s research as “flawed,” Epstein responded by saying Google failed to rebut his arguments in substance. He’s been told that Google has spread messaging to the effect that his study was based on 21 undecided voters.

“That is not true,” he told The Epoch Times.

The study was based on more than 13,000 searches preserved from 95 field agents in 24 states. Of those, 21 agents identified themselves as undecided voters, but that was irrelevant to the results, since the search terms prepared for the study were determined by an independent group of raters as neutral, he said. Political preferences of the agents thus had no effect on what they typed into Google. Furthermore, the results proved significant in statistical analysis, indicating that the number of agents didn’t undermine them.

“The probability that we got our results based on chance alone was less than one in a thousand,” Epstein said.

The study built on experiments with “tens of thousands of participants in five national elections in four countries,” he said, that showed Google’s power to sway undecided voters by giving more or less prominence to search results favorable to different candidates.

Epstein said he didn’t know why Trump referred to 16 million in his tweet.

He said the broad range of his estimate—2.6 million to 10.4 million votes shifted to Clinton—was due to there being ways for Google to “increase the magnitude of the effects” it had on voters by, for instance, targeting certain voters or by voters exposing themselves to the biased results multiple times.

Epstein’s research has been recently highlighted because of his congressional testimony on July 16. In recent days, he’s offered comments and analysis on the nearly 1,000 pages of internal documents released on Aug. 14 by former Google software engineer Zachary Vorhies.

In an Aug. 14 interview with Breitbart Radio, Epstein claimed that Google executives have committed perjury by telling Congress the company doesn’t “rerank” search results and doesn’t have blacklists.

Epstein pointed out that the trove of leaked documents includes two blacklists. One of the lists, marked as “manual”—meaning made by humans—contains a number of fringe political websites, of which most appear to lean right. It also includes some mainstream conservative-leaning websites such as dailycaller.com, and news watchdog newsbusters.org.

The blacklist indicates the sites are blocked from the feed that shows up below the search bar in the Google mobile app.

The list marks many of the sites as having a “high user block rate.” It’s not clear why these sites would need to be blacklisted manually if a high block rate alone automatically placed them on the list.

Epstein also noted that one of the leaked documents describes how to create a “twiddler”—a program that tweaks search results by, for example, pushing certain results up and others down, based on criteria specified by the programmer.

“They literally rerank search results to meet their ever-changing needs, and some of those needs are political needs,” Epstein said.

The documents that Vorhies provided, together with his explanations and hidden camera recordings by Project Veritas of other Google employees, indicate that the company has created a concept of “algorithmic fairness,” through which it infuses the political preferences of its mostly left-leaning workforce into its products.

Several studies have shown that the Google News product is biased to the left.

Epstein warned that in 2020, if companies such as Google and Facebook all support the same candidate, they will be able to shift 15 million votes—a margin surpassed by only a handful of presidents.

Update: The article has been updated with information from an interview with Robert Epstein, with further information about President Donald Trump’s tweet, and with a response from Judicial Watch.

Trump Again Pushes For Russia’s Readmittance To G-7, Says It Would Be ‘Appropriate’