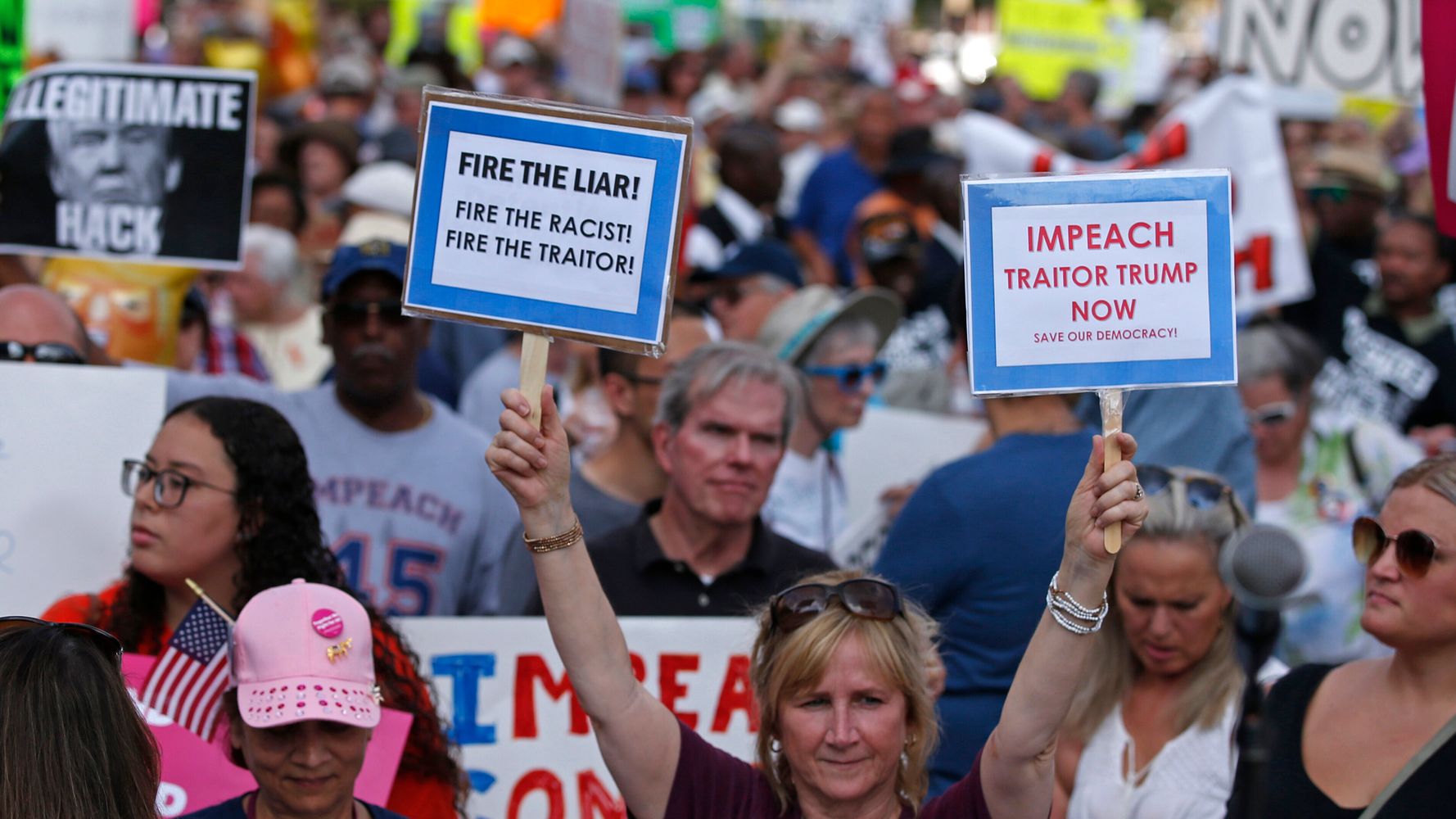 CINCINNATI ― People at President Donald Trump’s rally in Ohio grew rowdy as they clashed with demonstrators advocating for immigration rights on Thursday, cheering when a protest sign got ripped.

At the time, Trump was falsely accusing Democrats of caring more about inhumane conditions for migrants detained at the border than about the conditions of U.S. citizens.

Scuffle breaks out in Trump crowd after protesters held up “immigrants built America” sign. Trump supporters tried to rip the sign out of their hands. pic.twitter.com/taCRKxoCqe

Someone unfurled a “Immigrants built America” sign, and Trump stopped speaking while the crowd tries to yank the sign away from him pic.twitter.com/qOeXTeHvpy

The president paused his speech for almost three minutes as the scuffle broke out and one of the protesters’ banners was ripped. Security guards eventually escorted the demonstrators out of the stadium.

The crowd roared when the small group of protesters left, and almost the entire arena broke into chants of “Na-na-na-na, hey-hey, goodbye!” and “USA!”

“Cincinnati, do you have a Democrat mayor?” Trump asked sarcastically as he resumed his remarks.

Wow — while his speech is being disrupted by a protester, Trump checks with someone in the audience to make sure Cincinnati has a Democratic mayor (you can hear this on the mic). When he’s told it does, Trump repeatedly calls out, “Democrat mayor!” pic.twitter.com/aNgSMl61mN

A few minutes later, Trump was interrupted again by a man in a cowboy hat behind him. Police arrived more quickly this time, removing him as the crowd again went wild.

Protesters weren’t the only source of the crowd’s animosity Thursday night. Before Trump took the stage, a large, white man lingered by the designated press area, leaning over the gate and looking menacingly at reporters. He then pointed at certain reporters and made a slicing motion across his neck. The man also made the shape of his gun with his thumb and two fingers, pretending to take a weapon out of his pocket.

Confronted by a HuffPost reporter about the threats, the man wouldn’t identify himself.

“If I were president, they’d all be in jail for treason, for fake news,” he said, pointing to all the reporters. “Every channel but Fox.”

A Trump campaign official later told HuffPost that the man was removed from the arena.

At least two speakers before Trump ― Donald Trump Jr. and Brandon Straka, the founder of Walk Away, a campaign urging liberals to “walk away” from the left ― pointed at the press pit, prompting attendees to boo journalists reporting on the rally.